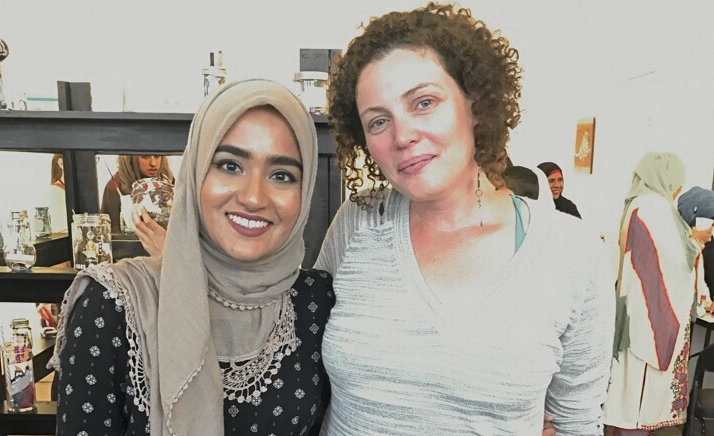 What does it mean to be ‘Muslim’?
Who is an ‘American’?
What defines ‘youth’? This exhibit is not an attempt to find definite answers to these questions, but rather, to explore the unique and dynamic responses, from those whose lived experiences provides the most valuable insight. As you explore this gallery and look into a translucent, transparent, or even tinted jar you may find a 2014 high school graduation tassel, a mini baking spatula, and slivers of African black soap. In the next jar, you may come across a folded letter, a photo strip, and prayer beads. What intersections of identity do these everyday found objects represent? And how do these objects–individually within the confines of a jar and collectively situated on the shelves of the cube–provide varied answers to the questions above? ‘Preserving Identity’ is a community curated art exhibition, exploring Muslim American identity–however that looks like–through found objects. As part of this project, we’ve asked local Muslim American youth in the Detroit and surrounding communities to find a jar and place objects that resonate with elements of their identity. The focal point of this gallery is thus a collection of these jars, situated on an open-frame black cube, representative of a broad number of Muslim Americans with different interests, intersecting identities (e.g. race, class, gender, ethnicity), and varied personalities. In this way, the personal narratives of what it means to be uniquely Muslim and American is quite literally centralized. As an interactive and growing gallery, this exhibition asks that visitors actively engage, by posting notes, as a non-Muslim ally for example, or making a jar, as a young Muslim American wandering through the room, looking from jar to jar and reflecting on their own personal identity. It is our hope that visitors will be delighted, curious, and engaged by the everyday objects they find in this collected menagerie of jars. This promises to be a dynamic experience and a great opportunity to mutually increase connection, understanding, and visibility between coexisting populations, during a particularly turbulent and divisive time in our nation’s politics–when what it means to be Muslim is written for Muslims, and not by them. This gallery is an attempt to wield the power of narration. Nushrat Rahman was born and raised in Detroit, near Hamtramck. She is Muslim. She is Bangladeshi. She is American. Studying English and Sociology at Wayne State University, Nushrat is working towards a career in publishing and/or academia. Her research interests include Early Modern literature, American literature and feminist theory. As a community organizer in the Southeast Detroit area, she works with the Detroit youth chapter of the Muslim American Society (MAS). Nushrat has dubbed herself a “self-taught artist” who dabbles in graphite drawing and watercolor painting. You’ll find her routinely talking passionately about women’s rights, intersectionality, and the gentrification of her city.

Sarah Rose Sharp is a Detroit-based writer, activist, photographer and multimedia artist. She has shown work in New York, Seattle, and Detroit, and writes about art and culture, online and in print, for Art in America, Hyperallergic, Flash Art, ArtSlant and others. She was named a 2015 Kresge Literary Arts Fellow for Arts Criticism and was selected as a participant in the 2015 Art Writing Workshop facilitated by AICA/USA and the Art Writers Grant Program. She is primarily concerned with artist and viewer experiences of making and engaging with art, and conducts ongoing research in the state of contemporary art in redeveloping cities.