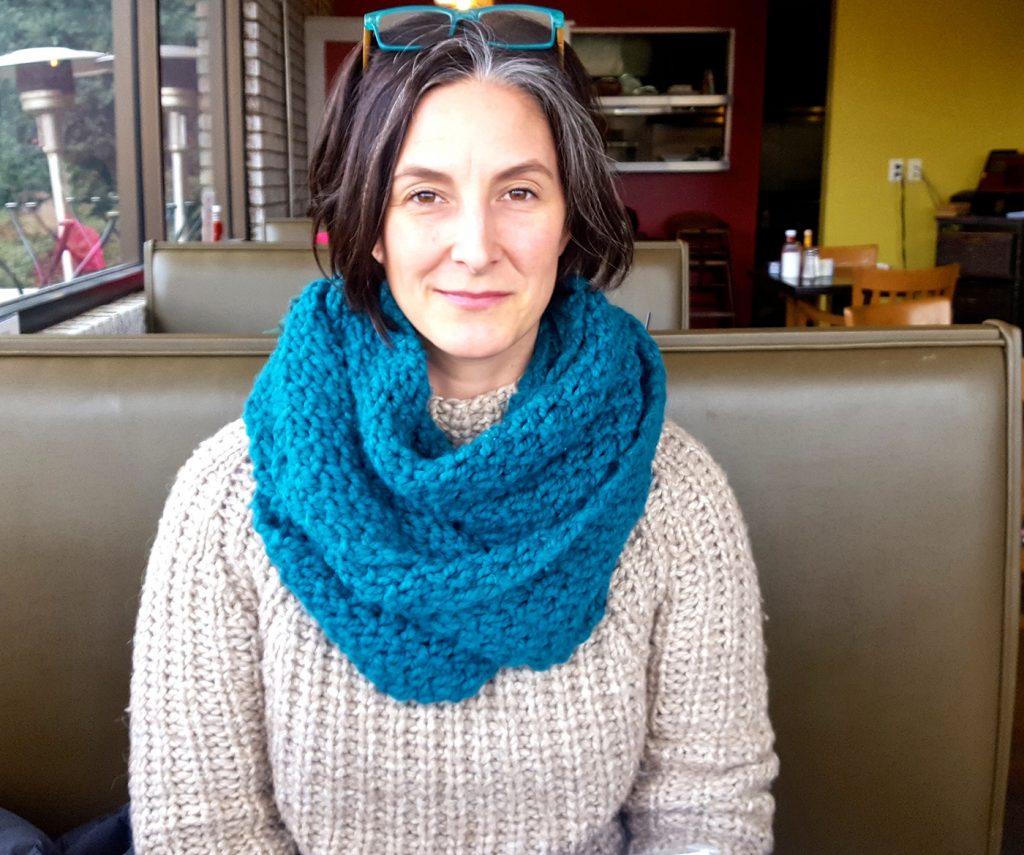 SG – The Mexicali Sally (no dressing, no cheese, no tortilla strips), hot tea

I suspect that I’m going to have a little trouble writing about Shannon Goff, as I usually do when I try to write about subjects that I just instinctively like a lot. Shannon’s forthright manner and open spirit struck me from our earliest interactions – connected to her solo show, Miles to Empty, one of the final shows at Susanne Hilberry Gallery. Shannon constructed a raw clay piece, titled Doyenne, which stood as a tribute to Susanne just as she passed away, and underscored how deeply important and influential she was to the artists she represented. Shannon and I had several exchanges during this time, via email, and I eventually went on to write a catalogue essay for a book about the exhibition, all without ever meeting Shannon in person.

But when we did finally get to meet face-to-face, on last week’s visit to Penn State University School of Visual Arts, where Shannon is (fittingly) an interdisciplinary professor between sculpture and ceramics, it was hard for me to believe we hadn’t known each other forever. Shannon is exactly the type of personality I associate with the very best of Detroit – diligent, direct, and tough. There are really few people who seem able to juggle teaching, art career, and young family (which she shares with her utter delight of a husband, also artist-teacher, Tom Lauerman), but Shannon is laughing through the storm. Her work, especially her visually dynamic paper-clay constructions, radiate her ebullient sense of humor, and her work in cardboard verges on upsetting in its attention to detail. Shannon laughingly calls herself “the freakshow of academia,” and one senses that life in the football-worshipping PSU ecosystem takes its toll – but I’ve found that those who dare to assert their weirdness in a sea of normalcy are always the weirdest-best, in the end.

Still, Shannon speaks longingly of Detroit, and our conversation ranged around her upbringing in Metro Detroit – more connected than most suburbanites to Detroit proper. Shannon recalls times at her parents’ restaurant out at 12-mile, where she began hostessing at the age of 9; scenes between her father (“My dad’s the greatest egg-man!”) and customers that taught her the line between service and getting walked all over; and the nun at her Catholic school that would bring her and other classmates down to the Corktown neighborhood where the sister lived, to serve at the soup kitchen. Like all the best Detroiters, Shannon has a laser-point bullshit detector and very little time for those who are all talk and no action.

“I kind of work around the periphery of the field,” said Shannon, in the midst of a tangent that reflected some of her frustrations with the kind of social discourse and espionage that comes with both academia and art world. Somehow, despite her palpable disdain for most of these hierarchies (PREACH GURL), Shannon is slowly but surely making a name for herself, floating between clay and cardboard. In April, she’ll be participating in a two-woman show at the Elijah Wheat Showroom in Bushwick, paired with Nasty Woman upstart Roxanne Jackson. The show is set to open April 7th, and sounds like it will be two incredible personalities working to meet in the middle. I imagine sparks will fly. This is just one of two exhibitions to which Shannon is a contributor in Bushwick this spring, and on the heels of her inclusion in an international group show, Vigorous Form, in London. Catch her if you can!

Shannon seems to exist in a permanently fired-up state, and it’s a little bit of an out-of-body experience to talk to her, and gain some perspective on what it must look like to others when I rant out my neck about various passions and grudges and frustrations. Shannon has some choice notions about ceramics as a discipline: “Just because something is made out of ceramic doesn’t mean it belongs in the same room together.” I am reminded of the tendency of straight people to try to introduce the only two gay people they know to each other, on the sole basis of their shared sexuality. Shannon isn’t having it (the ceramics thing; I have no idea how she feels about same-sex courtship rituals).

To use the parlance of Detroiters – who never met a car metaphor they didn’t like – Shannon is a sparkplug and a true original. So glad to get to finally meet her.