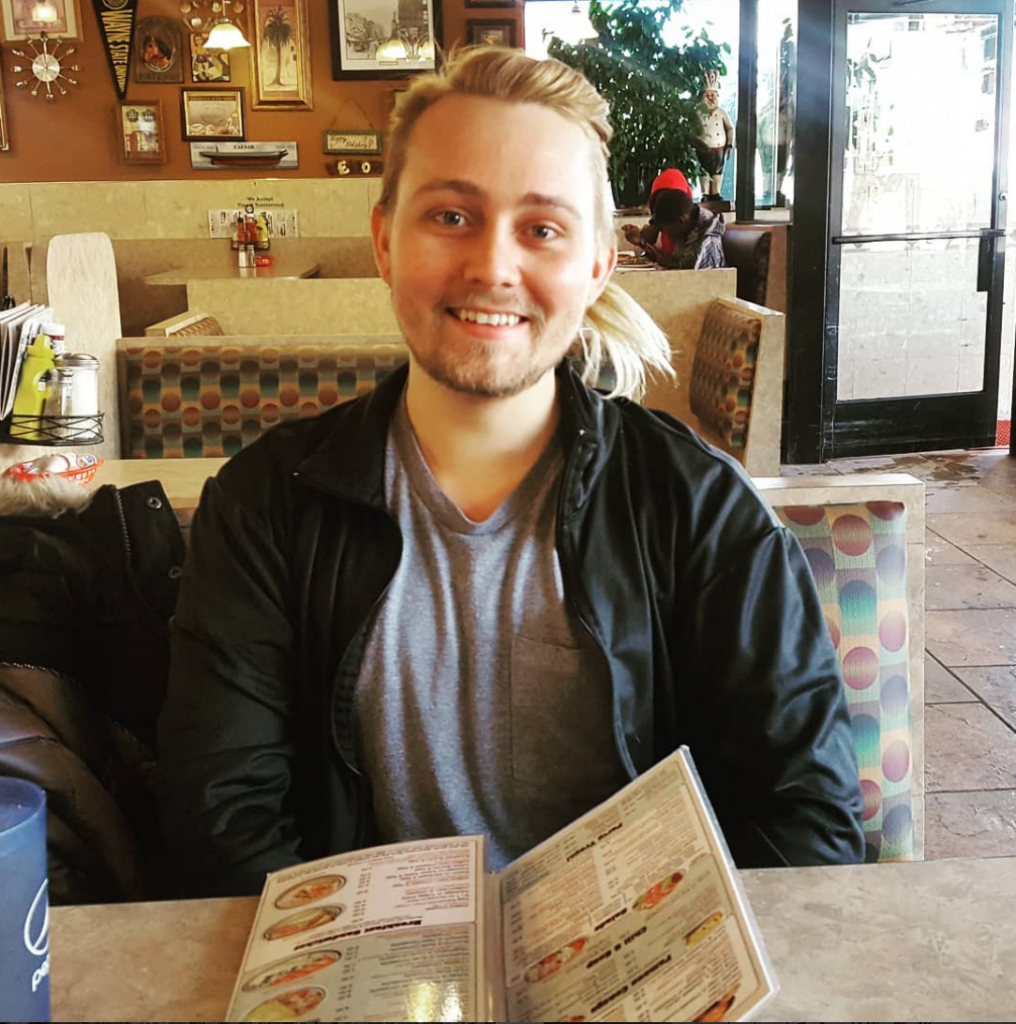 At the tender age of 22, Feather Chiaverini has mastered several crucial ingredients for success: quotability and the willingness to wield a strong opinion. As someone who is more or less professionally employed to have opinions about things, and find myself at times despairing in the face of so many indecisive members of the Lost Generation, Feather’s laser-edged deployment of definitive statements is a breath of fresh air. He has learned the absolute rule of our post-factual era: content is not nearly as important as conviction.

“I work with cleaning a lot in my work,” he says, “because you have to be some form of a monster to leave a mess.” This is just one of many subjective truths delivered matter-of-factly throughout our wide-ranging conversation, which covers aspects of Feather’s colorful upbringing in Florida. Like everyone destined for greatness, Feather has a knack for self-mythologizing, paralleled only by the sheer weirdness of his lived and familial experiences. From his mother, whom Feather characterizes as a Dolly Parton-looking brawler, more drag queen than straight female, to his father, who spent much of Feather’s childhood running an attraction called Pirate’s World, to a grandfather who was an Italian-born comedia del arte clown, Feather is the type of character writers dream about: larger than life, full of surprises, and producing a near-constant feed of slightly outrageous and eminently quotable stories.

“My mom and I were driving, and a homeless guy threw himself in front of the car, like, to try and get hit so he could sue, and she just kept driving. I was like, ‘Mom, aren’t you going to stop and ask if he’s okay?’ and she was like, ‘You can’t ask if anyone is okay in Florida.'” One imagines sage wisdom like this handed down around a cigarette crooked in the corner of her mouth, chemical updo starched in place. I’ve never seen Feather’s mother, it’s just the kind of image he evokes when he talks about her. He describes much of the work he’s done during his time at CCS as dealing with his mother as subject.

“I figure, get your mom out of the way in undergrad,” he says, “so that’s handled.” Lately, he’s branched out to working on his father (“So, pretty into pirates right now”) who, in addition to other eccentricities, named Feather and his siblings after characters from The Blues Brothers. That’s right, our Feather was christened Elwood, and became Feather in an prolonged work of performance art wherein his identity and social media platform were taken over by a sentient feather, which held the young man hostage until he came out as gay. Feather jokes in retrospect about attempting – even being convinced of – heterosexuality in his high school years, but anyone who has attended a performing arts high school (like us) should be well aware of grey area such an environment creates for nascent sexuality.

Feather is a born charmer and a showman, and his art combines fiber-based contraptions – some of these are elaborate costumes incorporated into live and video performances, others are mixed-media sculptures that appear to serve as proxies for figures in his life (such as “mama” or “allies“). His work, like his personality, is interactive, outrageous, and fun. Though Feather clearly loves attention, he seems adamantly drawn to work that is dynamic, physical, and involving others. He does not have time for painting.

“Painting is selfish,” he declares. “One person, by themselves, painting some form of their expression—the strokes—they think that every little aspect is important. People don’t really care about how much you spend on paints—fabric is expensive too, you don’t hear me talking about it. And they call for so much attention for one person, to really delve and build a relationship with this painting, and like—you’re already being exclusive to people who have that much time on their hands, to really get into every single nuance, like, see what I did with the white titanium paint? No. I’d be much more interested if you took a photo of this and projected it. I would be like, thank you, for something different.”

The perspective of age suggests that Feather will grow out of some his youthful exuberance and determination, but I hope not. The world has enough deferential players and half-baked opinions. There is much to be said for someone who will declare painting dead, just to watch painters lose their delicate minds about it (for the record, I am also one of these people, so naturally I’d think so). Anyway, I have high hopes for Feather – he has the best five-year plan I’ve heard so far.

“My five year plan is to get some form of either accident or disease that makes me lose the bottom of my feet,” he says, “so I can have permanent rollerblades attached. Then I can go anywhere, and it’s totally permissible for me to go into the grocery store with wheels.”

You cannot argue with logic like that, and I would be loath to try. Roll on, Feather Chiaverini. May the road rise to meet you.