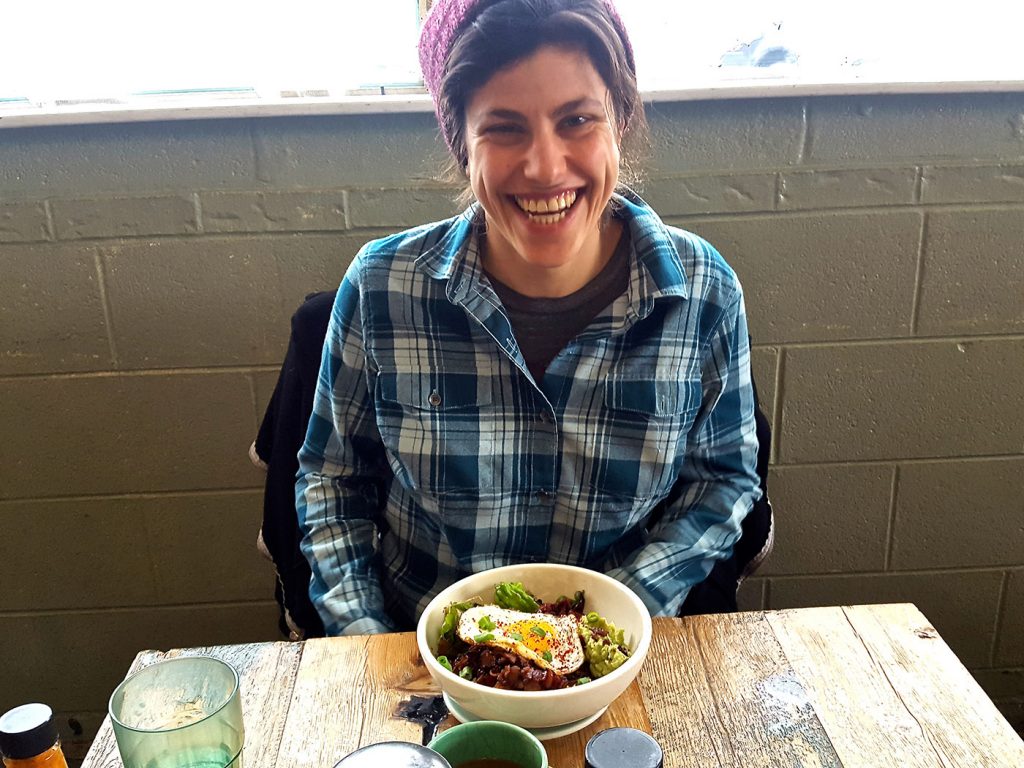 Have I ever told you about a game I like to play, called ‘Who Is the Most Like Me?’ The way it works is, in a semi-crowded situation, say, a restaurant, I look around to find the person who is the most like me. This might be the person who looks the most demographically similar to me, but that’s not always the person who is most like me. The person most like me is probably the female sitting by herself, back to the corner (spy training), reading a book (escapist), eating a meal comprised 85% of carbs (delicious). Or maybe it’s the kid sitting under the table, looking furious (hermit). It can be hard to see oneself, and I am the type to always be looking for some reflection in the world around me (narcissist).

Well, if artist Sophie Eisner happens to be in the room, then the person most like me is going to be her. Every once in a while, the universe does you a solid and sets someone down in front of you that is a lot like you. This comes as a great relief to me, because Sophie is really wonderful, so I must be, too. Here are some things that make us the Most Like Each Other:

– We don’t grow where we were planted: Sophie started in New York City, and made her way to Minnesota, Vermont, and finally Detroit. I started on the West Coast, and made my way to New York City, then landed in Detroit. Some people are born, live, and die in the place where they started. Their roots touch soil. Sophie and I are air plants, and can draw nourishment from the atmosphere. Freeing!

– We drove all around the country: The two of us have both spent considerable time trucking around the highways and byways of our great nation – Sophie in the form of a “mobile residency” that took her all around the country, making art and meeting people. Me in more of a panic-fugue state that served as my transition between New York and Detroit, by way of all 50 states. Something you learn, as we have, when you spend a lot of time roaming around outside of a few urban centers, is that there are cool people everywhere, with pride in their own places, doing their own thing. We did not discuss this, but my observation is that the exception is Kansas. We could, as a country, do without Kansas. It’s not bringing that much to the table.

– We are “sponge girls”: This is Sophie’s term for people who are sensitive to the emotional states of others around them, and pick up on their projected energy. If it sounds uncomfortable, that’s because it is.

– We question systems: This is, I think, a subset of being a sponge girl. Sophie and I talked about this, initially, in connection with the idea of pursuing an MFA (she has, I have not) – and my stance on that, and many other conventional activities (like getting married, having children, buying a Porsche, murdering trees to celebrate Jesus’s birthday) are fine to do or not-do, if only people would think a bit about why they are doing them. I viscerally abhor tradition – which is to say, doing a thing simply because it’s the thing that’s always been done. It’s fine if you think about traditions, unpack them, look at all their little pieces, and then choose to perpetuate them…but that’s different than mechanically replicating rituals and activities that have been handed to you without questioning them. Those are systems of control. Think about what they offer you, and what they cost in return.

– We like theater design: Just as I have drifted more generally into “fiber art” by way of an early interest in fashion and costume design, Sophie has become less strictly a ceramic artist or sculptor, and is veering more into interactive installation art, which could also be thought of as set design. She characterizes this as being into “flopping things over other things,” and indeed, some of this work looks almost cartoonishly drippy, like a puddle coming off a shelf as an intact sheet.

– We both got the Staff Favorite 2.0: Because it is the best thing on the menu.

You could tell that our conversation was the most important one in the restaurant, because the people at the adjacent table broke in three times to comment. This is what happens when you put sponge girls together to talk about life, art, and ephemera. With a little dedicated work, I think Sophie and I can figure out most of the world’s problems, not to mention begin impersonating each other, stunt doubling and creating airtight alibis for the crimes we will commit to throw systems into chaos. Looking forward to it!