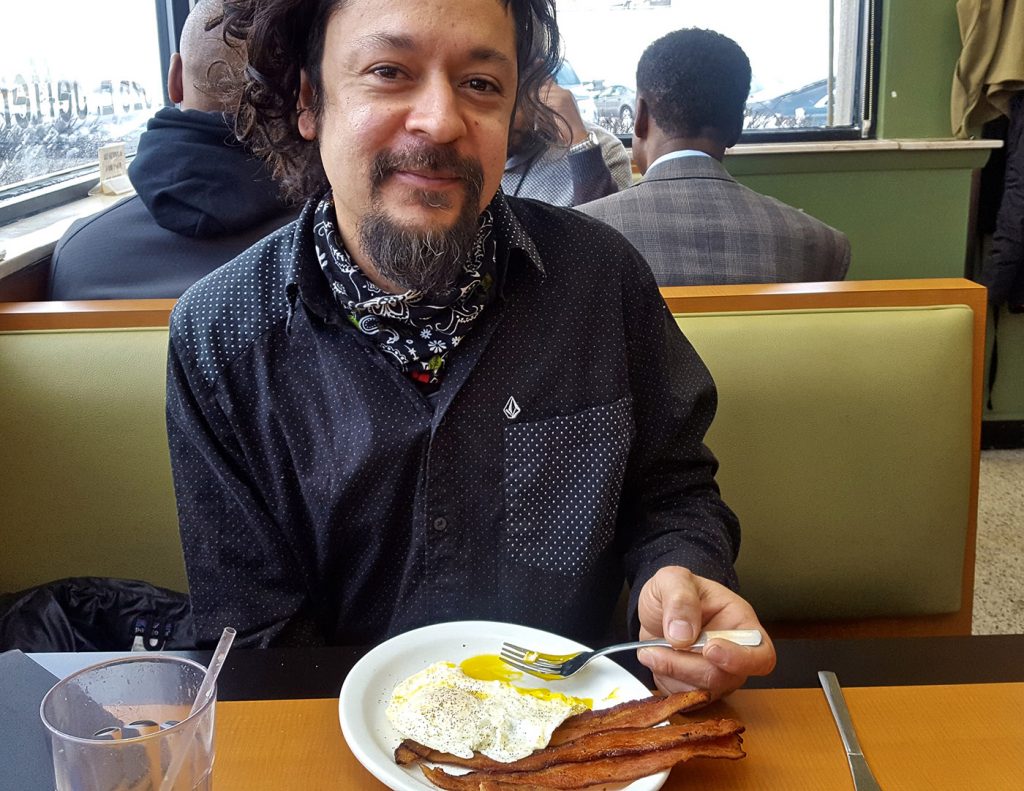 JM – Bacon & eggs (over easy), side of pancakes

SRS – Bacon & eggs (over hard), side of pancakes, coffee (black)

Let me keep it real, readers: I am exceptionally tired right now. I’m moving, and I’m a budding hoarder, so moving involves a painful and necessary evaluation and separation process from many potentially wonderful objects. Plus, you know, trying to keep up with a multi-channel art career and doing enough work to pay my bills without killing me, and all the other kinds of myriad stress and excitement that spring brings. I say this not to complain, but to underscore that on this March morning as I set out for the Clique, I was probably more excited about having the tiny pancakes that come as a side dish than I was to forge a new connection with an artist that I have admired from afar for some time now. I’m an introvert, guys, and sometimes introverts need pancakes more than friends.

However, all that was washed away in the glow of Juan Martinez’s radiant spirit. What an unflaggingly gamely and positive person! What a unique soul! Juan came to art by way of fabrication, and since it’s confession time, dear readers, I will let you know that I love nothing better than someone who is born an artist, not made. Juan is a native of New Orleans, but he’s been in Detroit for about six years now. According to him, the transplant NOLA feels compelled to purchase suspenders and a hat and starts a whole whimsical existence.

“I’m not cool enough to live in New Orleans anymore,” says Juan. Gurl, I hear you. I’m not cool enough to live anywhere. Juan fell into his craft accompanying a friend on a trip to Mexico. He stay to study metalwork there for six months, and then used the objects he made as a portfolio to get work as a fabricator. In truth, art is a different scene for Juan, who stepped into the spotlight as an artist-fabricator with a set of animal bikes he designed and constructed for 826 Michigan. They are really cool. Juan is working on a rhino bike (!!), but has another project idling in his queue waiting for some support to come through. It basically sounds like he’s planning to marry a bumper car with a life-sized metal Hungry Hungry Hippo, that can then be activated to ride around gobbling up Monopoly-style houses. Therein lies a potent metaphor for gentrification, I think. Plus it sounds like a lot of damn fun.

Juan has been spending his post-Kresge time learning some new skills. I don’t know if I’ve ever met someone as enthusiastic about learning as this guy. He’s been attending Fab Academy, learning 3D design and digital fabrication. He explains something called a “living hinge” – a form of furniture join that requires no pin, because the intersecting planes of the chair (in this case) contain the threading elements of the hinge. Or that’s my low-tech take on things, anyway. Perhaps because Juan’s art is based in fabrication, he has a strong capacity to extrapolate art ideas in the direction of functional objects. He’s sort of like a living hinge between stuff that looks cool and stuff that does stuff.

Juan and I also talked about interpersonal mishegas. Relatively new to the art scene, Juan is trying to figure his way into that social network, and I’m more or less trying to find my way out of it. I’ll tell you a secret about introverts, guys – even pretty high-socially-functioning introverts, like me – people can be a little too much for us. But just when I feel determined to withdraw from society completely, I have breakfast with someone like Juan, I remember that people can be pretty great and art is my favorite thing to talk about. Plus, tiny pancakes!