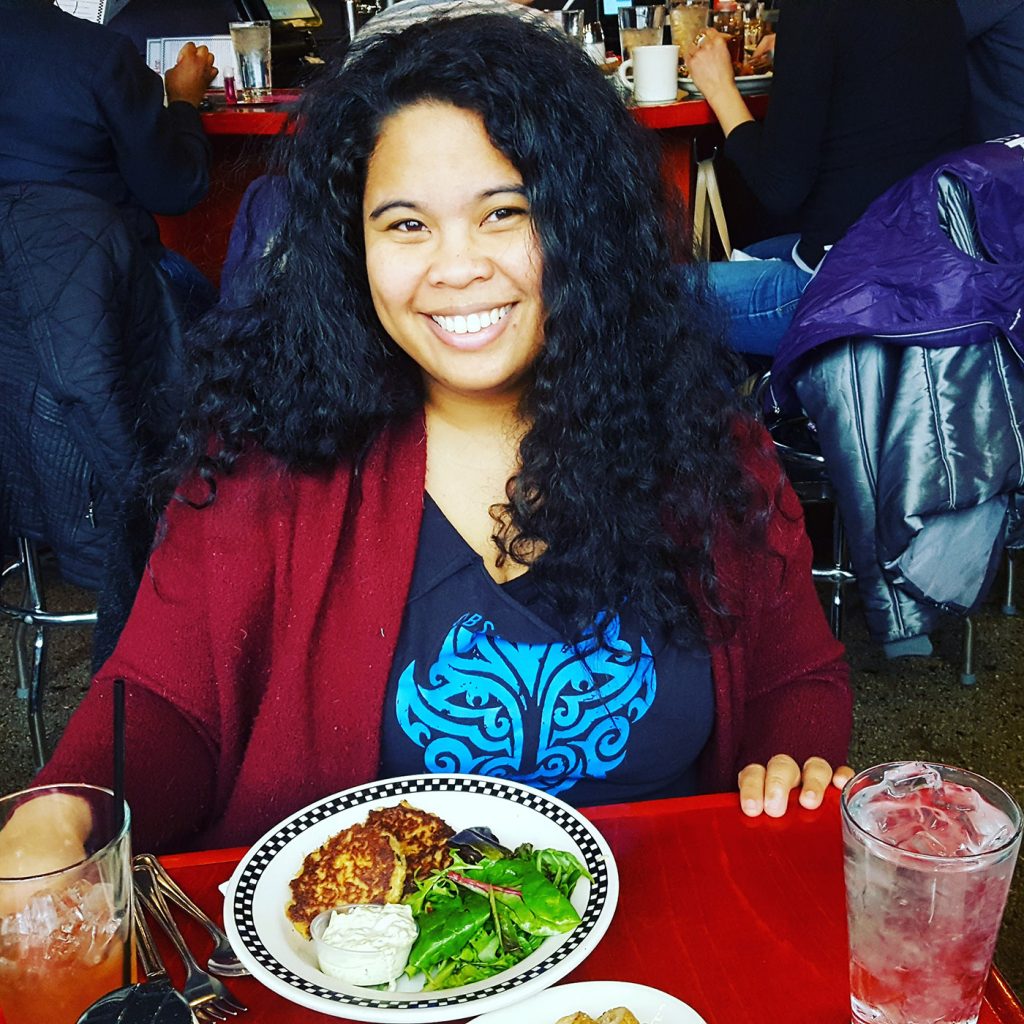 SRS – Gingerbread waffle with apple and cherries, side of bacon, coffee (black)

Is there anything more fun than having a first hang-out with someone, when both of you are kind of mutually fangirling on each other? I remember seeing Sherina read as part of a line-up at N’Namdi Gallery some years ago, for the launch of Casey Rocheteau’s poetry collection, “The Dozen” – and just being stunned by her presence and her work. Apparently, for some reason, she is also into my writing, so there was a lot of mutual admiration society going on when we met for brunch. Also, her hair is everything I would like my hair to be (I say this as a person with wildly curly hair. If you don’t have curly hair, please don’t talk to me or other people with seriously curly hair about hair. You have no idea what you’re talking about. If you say, “when it gets long it can be really wavy!” just know it makes me want to cut your face).

“How is your dramatic veils project going?” Sherina wants to know. She is referring to my statement, when we agreed to meet, that I’m on course to withdraw from society, never to be seen again, expect perhaps secretly in public wearing dramatic veils. I’m tired, people. I’m an introvert (I have never actually met a writer who is not an introvert), and socializing takes more energy than I have these days. It has been nice knowing you.

Sherina has good news for me, though. She has been researching the root chakra, which is connected to our fundamental basis for survival, safety, and security. According to Sherina, news from the root chakra is that we all have a divine right to the things that make us feel safe and secure. If that means withdrawing from society, so be it. Sometimes that feels easier to me than just simply telling people “no” when they need something. Especially when they don’t want to take no for an answer. Last year was not the easiest for me, but a lot of it had to do with clearing away the elements that made it hard for me to hear myself. Having done some serious work on that subject, I’ve arrived at the place where I realize I need more space for myself, and less for other people. I think it’s a realization that a lot of women come to, but maybe few have the luxury that I have as a childless and (terminally) single woman to actually assert that space in a dramatic (veils) way. Sherina and I talked about the merits of saying no, of creating boundaries, of recouping the energy it takes to explain oneself and one’s basic need for respect and security to people who can’t make that a baseline factor in spending time around you. The merits of skipping family holidays that are sure to be argument-fraught debates on life and politics. The root chakra right we have to remove ourselves from situations, professional and interpersonal, that don’t take our feelings into account. I’ve had more of these situations than I care to quantify over the last couple of years, and I’m tired of it. Sometimes it can be hard to remember that for every entitled asshole, there’s a Sherina out there, brimming with wisdom and positive energy…and if I withdraw from society completely, I will be taking a pass on both.

We also talked about the post-#metoo climate, and how it’s changed our tolerance for the kind of social aggression that most women have been taught to take in stride for our entire lives. I have never been a particularly quiet or passive woman (see above: terminally single), and I laughably thought I was pretty in touch with my rage about the constant entitlement of men with respect to my attention, my body, my help, my empathy – but now that there is more of a forum for women to acknowledge that we’re constantly tiptoeing around men’s delicate flower feelings, while quietly doing work behind the scenes to make sure they don’t have to deal with things that upset them, while their friends and their dads hit on us, while we’re still trying to earn a living a sub-standard wages, while we’re asked to do organizing and emotional labor for free (not EVEN asked, really, just expected!) – it turns out that I am REALLY. FUCKING. ANGRY. about it. Angrier than I knew. And that anger is closer to the surface and more readily expressed these days than ever before. Yesterday, I called a guy in a truck that honked at me and tried to swerve into my lane a “dick suck.” I yelled it out the window at him. He turned left in a hurry. THAT’S RIGHT. FUCKING DRIVE LEFT, YOU DUMB DICK SUCK.

An unexpected twist of my post-#metoo existence is a renewed interest in TV shows that revolve around violence against women. This seems paradoxical, I know, to be working my way through 12 seasons of Criminal Minds as a kind of relaxation exercise after long and cognitively difficult days of moving my entire home to another place, but Sherina hears me on this, confessing an obsession with Law & Order: SVU (which is the Special Victims Unit, concerned with sex crimes, thus rape-and-murder fare). I can’t speak to Sherina’s reasons, but I took a many-years-long hiatus from shows of this nature, having reached a point where I concluded that violence against women as entertainment was toxic and I should not expose myself to it recreationally. HOWEVER, lately I find myself actually more triggered my comedies and dramas from even just a few years ago, where sexism ad workplace harassment is treated so casually that it doesn’t even register with characters how crazy inappropriate they are being. At least on Criminal Minds, the people raping and murdering women are recognized to be the bad guys – on these other shows, no one even notices that sexual discrimination is taking place (HAHA JUST LIKE LIFE!!) Whether or not the real-world analogues to these crimes are prevented or punished with any kind of reliability, at least in this context, there are people who care enough about women to make the bad guys stop raping, stalking, and murdering them. It’s not the violence I’m tuning in for; it’s the JUSTICE. The phrase I came up with, taking with Sherina, was “justice porn.”

Sherina and I talked about group projects, which are pretty exhausting for introverts. Geez, I’m glad I got to meet Sherina before I enacted Project Dramatic Veils, because now maybe we can be friends. Writers make the best friends, because you can like each other and still be crazy introverted and everyone is just basically relieved to only hang out occasionally. We talked about friendships as tricky, because they are a type of relationship with no contract – how do you know the terms of friendship? What can be reasonably expected from them? What are grounds for termination for contract violation? We haven’t drawn up the paperwork just yet, but I have the feeling our people will be in touch, because Sherina and I have a pretty good start going.