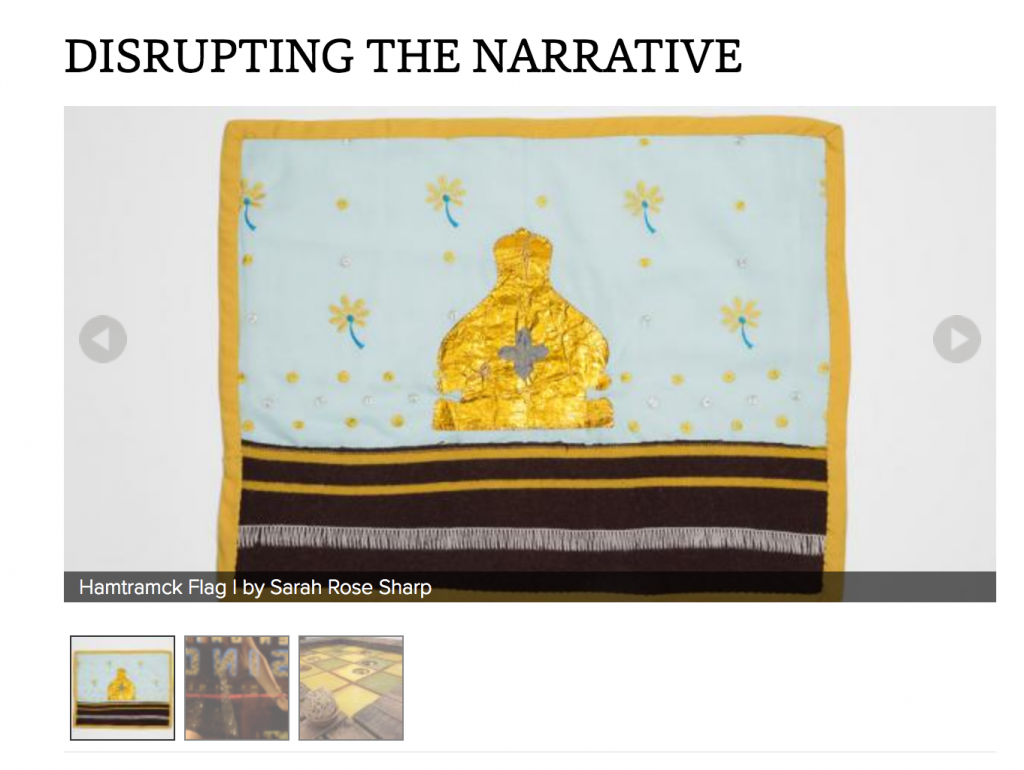 So excited to announce my participation in this four-woman show at the Ohio State University’s Urban Art Space! I’ll be showing a series of flag works (including the debut of a few new ones!) and a collaborative intermedia collage work with Laurenn McCubbin. Come on out, if you’re in Columbus – or make the trip, if you aren’t!
Tuesday, May 15, 2018 to Saturday, June 23, 2018
Urban Arts Space

Admission is free and open to the public

DISRUPTING THE NARRATIVE presents sequential narrative in multiple forms: 2D and 3D, on the page and on the wall, through sculpture, fiber, video, interactivity, and classic storytelling. Artists Shing Yin Khor, Sarah Rose Sharp, Emi Gennis, and Laurenn McCubbin invite viewers to participate in the construction and reshaping of narrative, engaging their mediums to utilize meta-level storytelling, designing objects and stories that can be “read” in multiple directions. Shing Yin Khor is a cartoonist and installation artist exploring personal narrative, new human rituals, and collaborative worldbuilding through graphic memoir and science fiction and large-scale art structures. Her immersive narrative haunted house art installations, The Last Outpost and The Last Apothecary, both built in collaboration with her installation art crew (The Black Rock Civilian Defense Corps), received grants from Burning Man for their 2014 and 2016 festivals. She has also recently completed another large-scale science fiction-themed site-specific installation, Salvage Station No. 8, in conjunction with Beam Camp in New Hampshire. As a cartoonist, her work has been published in The Toast and Bitch Magazine, and she has recently completed her first full length graphic novel, about traveling Route 66, with Zest Books. She creates comics at the intersection of race, gender, immigrant stories, and queerness.

Sarah Rose Sharp is a Detroit-based writer, activist, photographer and multimedia artist. She writes about art and culture for Hyperallergic, the Knight Arts Foundation, ZIPR Magazine, infinite mile, and others. She has been to all 50 states and shown work in New York and Detroit.

Emi Gennis is a cartoonist and illustrator from the Midwest. She has a BA from the University of Chicago, an MFA from the Savannah College of Art and Design, and an amount of student loan debt she doesn’t feel comfortable discussing. Emi lives in Columbus, Ohio, where she is Assistant Professor of Comics & Narrative Practice at the Columbus College of Art & Design. She previously taught Illustration & Visual Storytelling at Pittsburg State University‘s Department of Art.

Emi’s often macabre history comics have appeared in several online and print publications. She has also produced comics journalism for The Nib and Symbolia. Her autobiographical story Baseline Blvd was nominated for Slate’s Cartoonist Studio Prize in 2016. She is also the editor of Unknown Origins & Untimely Ends, an anthology of nonfiction mystery comics published by Hic & Hoc Publications.

Laurenn McCubbin is an illustrator, designer, editor and large-scale multimedia installation artist. She has a BFA from the School of the Art Institute of Chicago, an MFA in Studio Art from the University of Nevada, Las Vegas, and an MFA in Experimental and Documentary Art from Duke University. She is currently an Assistant Professor of Comics & Narrative Practice at Columbus College of Art & Design, the in-house designer for Milkfed Criminal Masterminds (Bitch Planet, Pretty Deadly), editor in chief of CCAD’s Spitball Anthology, and the editor of Moonstruck (Image Comics.)