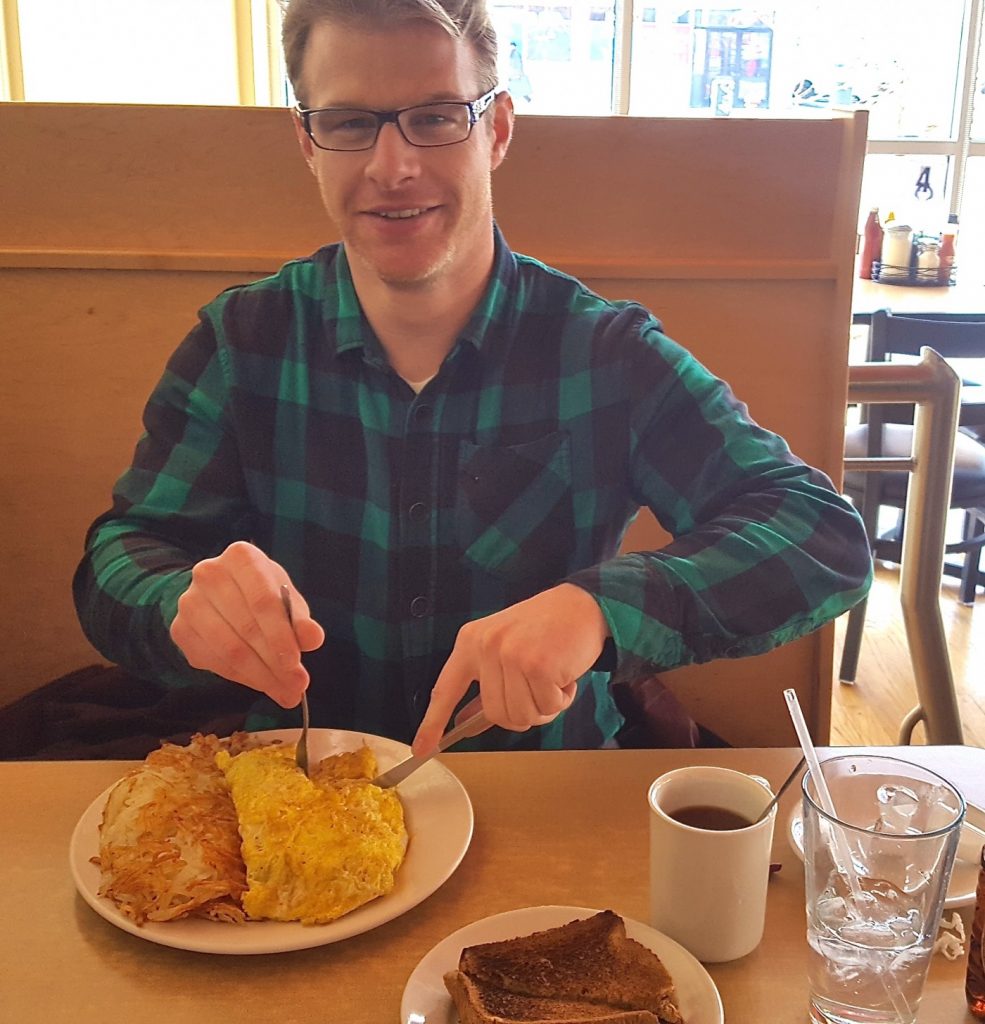 The point where Jon Phillips really caught my attention in our conversation was when he started talking about his recent fascination with configurations of everyday objects.

“I have some photos of bowls in the sink, with spoons arranged,” he said, “and not necessarily that I’m positioning them in a certain way – just during my everyday, how I set it down. Not really a conscious decision, but just placing it, and then coming back to it. Why does it strike me?”

This has come up for me a lot lately, because I’ve been in the process of moving, and getting to encounter strange tableaux that I created for myself within boxes of mixed objects. Probably the best one so far has been the Dutch oven packed with wooden cooking utensils, glass jars of dried chili from my garden, and two plastic pigeons. Jon is right, inasmuch it is not an arrangement I created formally, and it served the functional purpose of not wasting the space inside the Dutch oven as a vehicle for moving objects (I find you get very efficient when you have to move everything you own), but it was certainly a product of my brain, and certainly an arrangement made with a notion of viewer experience – in that I knew I would open the Dutch oven eventually and, having forgotten what I put in there, find it funny. The addition of two plastic pigeons makes 100% of arrangement humorous, I’m pretty sure.

“I’ve been walking on the street and seeing trash, or leaves, and how these objects are relating to each other – even by chance,” he continued. “And I’m curious because if you switch that into formal decisions, I think it takes away from what could potentially be there. And leaving it as a relic or an artifact of what art is.”

Jon describes himself as an atypical student, due to the fact that he did not enter art school (CCS, where he is finishing up his undergrad degree) until his early 30’s. Atypical, perhaps, but I find that older students tend to appreciate the contrast of academic life to reality, whereas those who are herded into college straight out of high school have had little to no experience of life without the structure of educational institutions (this is certainly true of me – I completed my undergrad at the age of 20 with basically no idea how the wider world worked). I wonder how many artists who completed undergrad before the age of 25 find themselves in their mid-30s, still beguiled by the wonder of art-as-everything? Fewer than I’d like, anyway. I like Jon’s willingness to be new to this world, and the vulnerability of the questions he asks, as he attempts to work towards art from the starting point of his background in data analysis.

“I don’t want to incorporate technology into art just for the sake of it,” he said. “I have to ask what do I actually want from technology in art?”

It seems that Jon’s current hurdle is to invoke the personal in his compositions – those of which I’ve seen are very adventurous, in terms of their formal relationship to space, but verge on pure design objects in terms of lacking narrative. These structures – two of which I recently included as juror of the inaugural Gilda Snowden Exhibition at the Scarab Club – look like suspended shelves or platforms, hanging in space or nestled precisely into corners, corseted with cord like a deadfall trap, or strung with gold elastic like an alien instrument. It is only Jon’s recent evolution to include specific objects – a chunk of brilliant blue rock, a baseball – that begin to make these works about something beyond their form and their physics. Something interesting! Baseball in the Afternoon by Jon Phillips. Image courtesy of the artist. Potentiality by Jon Phillips. Image courtesy of the artist.

In a way, Jon doesn’t strike me as the type that’s usually drawn to art. He grew up in Alaska, and appears to have a range of functional skills related to wilderness and nature. He served in the armed forces, and while I can’t say I was able to put my finger on that precisely before he mentioned, I did feel he had a bearing that was slightly different from those around him. In a way, he seems a little too normal – blond and blue-eyed, square shoulders, disciplined. Most of the artists I know, myself included, would chafe at the kind of uniformity required to successfully navigate a military hierarchy, but Jon seems to have taken the best qualities of that experience – level-headedness, formality, and adaptability – and is now attempting to apply them to an entirely different field. I wish the military had art class! I’m fascinated to see what kind of art is made by normal people. I’ve never met a normal artist in my life!

Of course, I am likely just projecting an air of normality on Jon – it is impossible to know anyone enough in the span of one short meal to be sure they are normal. Or really, to have pinned down the ways in which they definitely aren’t, because who is actually “normal?”

I have more thoughts about the art of arrangement, and normalcy, things-in-house-art, and also real estate for artists – but I also have more work to do than I can handle, so I’m going to leave it here for now. Jon is in a state of becoming that is interesting and self-aware, and I’m excited to see where he goes.

P.S. I’m sorry to say that after three years, I’m discontinuing Breakfast with the Artist. I have enjoyed doing it, and all the great artists and people I’ve gotten to know a little better as a result, but I also need to recoup my unpaid writing time to apply to different projects, now. There are a couple more to come, as I work through the last few BWTA appointments I have made, but I can’t take on any new commitments. So if we had breakfast, thanks! If we didn’t – perhaps there will be another time. Don’t give up on art or breakfast or yourself! All you need is within you! I promise!