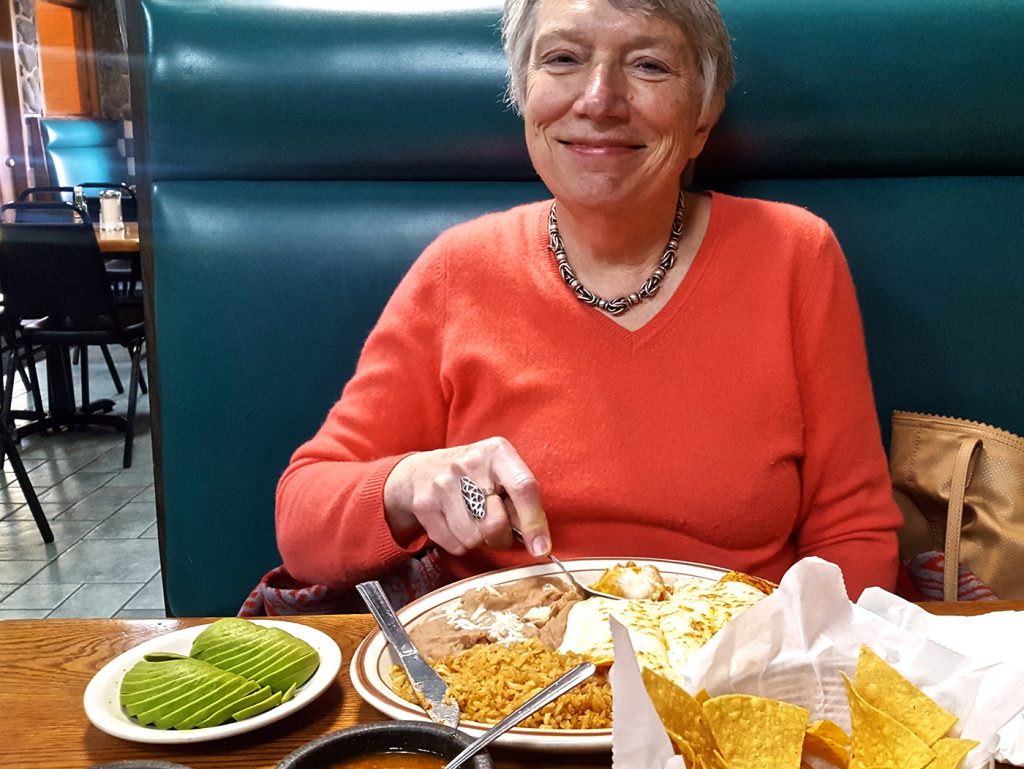 I tend to enjoy talking to people who have led somewhat episodic lives – that is to say, people who conduct one kind of lifestyle in a certain place, and then close that chapter and start another one, somewhere else, that perhaps bears little in common with the last. I often think that if high-school aged me (or my friends from high school) were told that one day my future self would be writing this while looking forward to a Saturday pilates class and going to get herb starters at the farmer’s market…they would not have believed it. But each episode of my life has seemed to flow logically – if sometimes abruptly – from the previous one. I know that our country worships youth, but I love getting older. The perspective from experience. Less dumb mistakes and more extremely productive mistakes.

Anyway, Margaret Parker has been through a number of chapters, each in a different place (or a return-to-place, finding it different), and each characterized by different occupations and lifestyle choices. In the history she sketched out for me over tacos, she spoke of her undergrad years at University of Michigan and the nature of Ann Arbor in the 1960s.

“The film festival was just getting started,” she said. “The art school was like a compound, and then artists could go get live-work spaces downtown, so that’s what I did.” She also met the man that would eventually become her husband, and in the 1980s, they moved to New York City in pursuit of art-world dreams. They found a prewar apartment on the Upper West Side and began to etch out a NYC bohemian art existence, which Margaret characterizes in retrospect as “exhausting” and hyper-social. Increasingly, Margaret describes the need for an “escape hatch” – I feeling I can well relate to, as a fellow escapee of New York – which for them manifested as a move to Castine, Maine. She and Mark ran an inn on the coast, the Castine Inn, for the next 13 years, and also had a child.

In 1997, they returned to Ann Arbor, an experience Margaret describes as being like Rip Van Winkle, waking up to find things around you unrecognizable. Upon reflection, though, she is inclined to think that a place doesn’t change, so much as you do.

“When we were living in New York and we’d come back to Ann Arbor for a visit, it always seemed so small,” she said. “But then, after living in rural Maine for awhile – and it was way out, there was nothing around us – Ann Arbor seemed like a big city!”

Big or small, Margaret has stuck around Ann Arbor for the long haul since then, and leveraged experience she accrued working on the Maine Public Art program – which has been installing murals in public schools as one of the nation’s longest-running public school art programs – into other public art organizing and facilitation work. She helped organize to pass a millage for public art in Ann Arbor, which became well-funded for a run of years before the financial collapse. Now she provides communications support for the Michigan chapter of the Women’s Caucus for Art, which facilitates connections and shows for politically engaged female-identifying artists. Their current show, Guns: Artists Respond, is up at Swords Into Plowshares through May 24. It would be natural if, through all this life change and infrastructure building, Margaret had let her personal practice fall to the wayside, but she’s remained determined to take actions that support art as a priority in her life.

“My mother was a quilter and a painter,” she said, “so I know where the crazy comes from.” She has been working to carry her mother’s legacy forward, since her passing, whereby Margaret inherited an abundance of quilts and paintings. Her next show will be a mother-and-daughter exhibition, where she juxtaposes some of her mother’s works with her own, more experimental fiber art. This includes a series of deconstructed t-shirts that Margaret extrapolates into “new things” – astonishing shapes and dimensional oddities in soft installations. I remembered, at the very end of our time together, that I had met Margaret once before, several years ago, during an iron casting workshop by Carbon Arts, at the previous Downtown Precinct location of the 555 Gallery. She was attempting to cast one of these elaborate t-shirts works into iron, piece by piece. It seemed a perfectly representational act for a woman who has moved between places and occupations so frequently, to embrace such a radical shift in medium. What’s next?

“I’ve been working on a lot of poetry, lately,” she said. But of course! The next chapter, it seems, might be in chapbook form.

P.S. I’m sorry to say that after three years, I’m discontinuing Breakfast with the Artist. I have enjoyed doing it, and all the great artists and people I’ve gotten to know a little better as a result, but I also need to recoup my unpaid writing time to apply to different projects, now. There are a couple more to come, as I work through the last few BWTA appointments I have made, but I can’t take on any new commitments. So if we had breakfast, thanks! If we didn’t – perhaps there will be another time. Don’t give up on art or breakfast or yourself! All you need is within you! I promise!