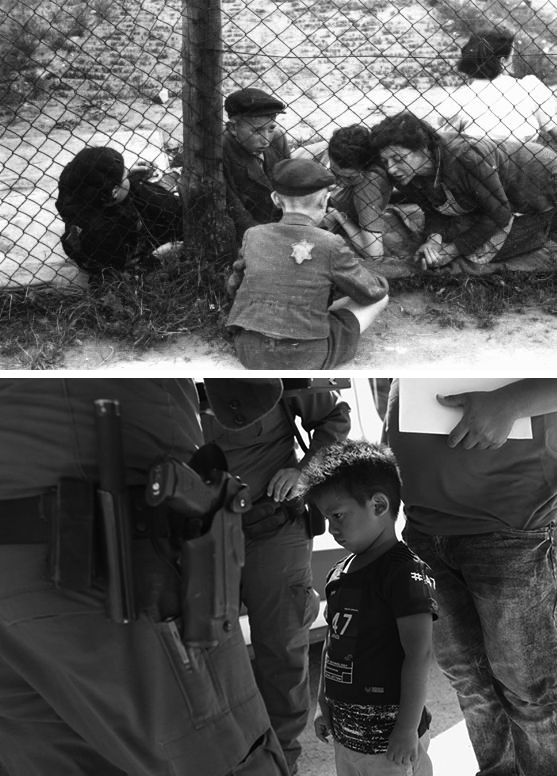 Good morning. It’s Wednesday, June 20th, 2018. The unmerciful heat has broken, and there are cooling winds bearing light rains creating gentle folii effect in the background, and taking care of my morning watering routine. It won’t be a great year for the garden, but it’s my first season in a new home; at least the beans are doing well. I spontaneously became a morning person about five weeks ago, and I’ve been up since 5:30, not doing much, to speak of, and it’s quite lovely.

My country is putting immigrant children, toddlers and babies, into interment camps.

It is hard for me to believe that anyone actually cares what I think – I write things, all the time, alone in a room with a desk and a dog, and I know they go into the world, and sometimes people tell me they read them, and it always surprises me. It’s also hard for me to believe that anyone who does happen to care what I think would need such a remedial lesson in humanity as the one that I’m about to attempt to impart. But in the midst of calling politician’s voice mail, cuddling the dog, donating to RAICES Bond Fund, and doing a bit of online shopping to numb my feelings (I NEEDED SPONGES, OKAY, I AM ALMOST OUT), I felt the need to express in words – which are not my only weapons, but arguably my best ones – a basic truth that I hope we can all work to internalize, if we have not already…

Everyone is the same amount of person as you.

I don’t mean everyone is the same. I mean that everyone, literally every living soul of the billions on this planet, is just as important as you, has the same capacity for feeling, thought, inspiration, and pain, and deserves the same respect, freedom, and recognition of their potential and their humanity. That resources and opportunity are distributed unevenly in the service of the few over the many is an old tale, but older still is the Tribe of Humankind, which hung together in solidarity – else, none of us would be here today, putting each other’s children in cages.

One of the main reasons I left New York, almost a decade ago at this point, was a palpable sense that it was stripping away my ability to care about other people. I have always had a little bit of a superheroine streak, you know? Wanting to swoop in and help people (and also be able to make wearing a cape look effortless). I didn’t leave New York with a clear plan, I left New York because I happened to see, across the Metropolitan Avenue subway platform on a late and drunken Saturday night, a young woman, perhaps 95 lbs, passed out drunk on bench. Petite enough that I could have slung her over my shoulder and carried her off. This is exactly the type of situation that should have launched Super Rosie into action, derailing my journey home to wake this girl up, or get her medical help, or help her get home – probably only to be crabbed at or thrown up upon. But as I tried to summon my instinct to care about a vulnerable fellow human, I was instead gripped with enervation. I thought: “Fuck it.”

I woke up the next morning and knew I had to get out of there. I didn’t know where I was going – and thank every guiding star and beneficent spirit that I ended up in Detroit, where people who had nothing to rely upon but each other taught me how to be human again – I just knew that it wasn’t okay not to care what happens to other people, and any circumstances that led me to feel that way needed to change FAST.

This is not a moment to say “fuck it.”This is a moment to be Super Usses. I will argue moral relativism all day long with you, but there is no version of reality where what is happening right now is okay or right. Every child in one of those facilities is a whole, entire person, with absolutely nothing in the world but their family; to remove them from that contact, perhaps never to reunite, is an act of gross and unimaginable cruelty. It has done nothing but ruin thousands of lives. It hasn’t saved anyone, it hasn’t helped anything, and it hasn’t solved any problems. It has created a psychic wound.

It’s not the worst thing that citizens of the United States have inflicted upon others, but it is unacceptable. If you’re reading this, and any part of you feels these measures are warranted or tolerable or even okay to ignore because you have a busy day planned, I urge you to reconsider. I beg you to try and identify your most sacred depths – the feelings you keep in a deep well that sustains you in hard times: faith in God, perhaps, wonder at the beauty of nature, and the complicated experience of familial love. Everyone, every human being, has the capacity for these things, and suffers in their absence. These children suffer. Please help them. Neither of the above are my image; I put them together.