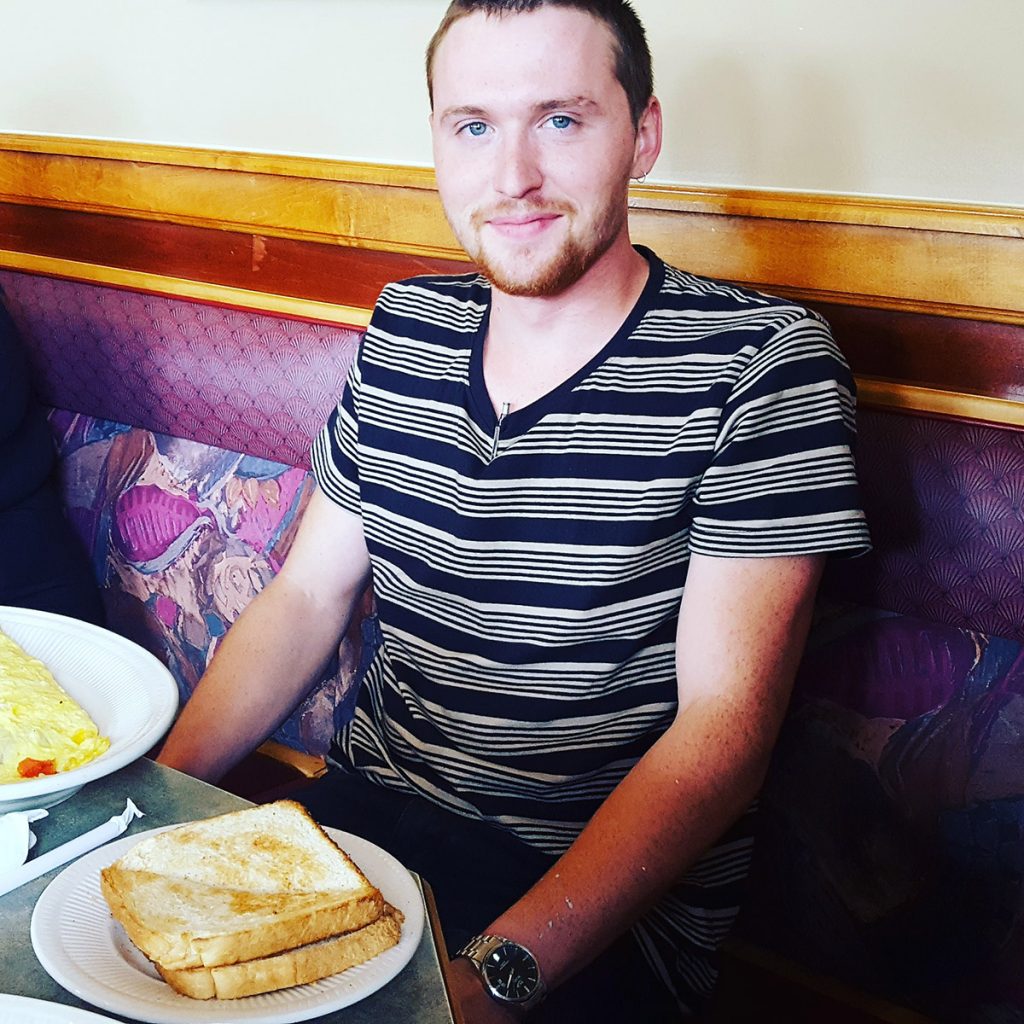 I’m frequently told that I am intimidating. This observation often arises in connection with my dating life, wherein men tell me I’m intimidating, or friends tell me any given man is failing to call me because he finds me intimidating – so I have generally assumed that “intimidating” is code for “fat,” and never imagined that I am actually intimidating to anyone.

I think sitting down to breakfast with Sam is the first time I’ve been aware, in real time, that someone finds me intimidating. Maybe this was because Sam’s inquiry email and subsequent communications with me were smooth and well-reasoned, but in person he seemed nervous. Or maybe because when I can’t follow what someone is saying, I ask them to back up and define words for me, or identify the indefinite nouns in their sentence (i.e. “What is ‘it?'”) One of the reasons I openly despise academic discourse is that opacity in language seems to be baked in to the formula. Rather than making ideas as accessible as possible, academia seems to be fueled by the idea that if you make a statement too convoluted for someone to follow in real time, they cannot dispute you, therefore you are smarter than they are. I don’t think this is what Sam was up to; I think he was intimidated, and it made it extra challenging to order his thoughts. It didn’t help that he tried for awhile to keep up with my level of coffee consumption, which is a really bad idea for basically everyone. Don’t just jump in there, guys, because I make it look easy.

I hope I didn’t intimidate him too much, because of all the BWTAs I’ve done – with the exception of K.A. Letts, who started her own art writing practice – Sam seems to be the most interested in arts writing and philosophy as a pursuit within his creative existence. I find this heartening! I been out there in these streets for a minute, attempting to evangelize about the merits of artist-sourced arts writing, but a lot of artists are like, “Words are hard!” Yeah man, life is hard. You still gotta do it. Sam wanted to talk about Arthur Danto, who is one of my role models, in terms of my values as an arts writer – but he approached this with a focus on picking at some of Danto’s specific ideas. I don’t know when dissent became a dirty word – perhaps it’s because the current model for discourse is polar opposite political ideagogues hurling playground invective at each other – but there is nothing wrong with disagreeing with someone’s ideas (disagreeing with facts is another matter). Arthur Danto was pretty endlessly enchanted with Andy Warhol, for example, and I think that guy is kind of the worst and I’m super done thinking about him! It doesn’t make Danto wrong, or Warhol wrong, or either of them irrelevant. Their ideas are precisely the thing I’m bouncing off of, to create my own. What I like about Danto is his recognition that he is not a taste-maker (as opposed to Clement Greenberg, for example, who more or less brow-beat society into finding some truly boring-ass paintings to be the alpha and omega of good aesthetics). I am not here to tell you what is good art. I’m here to try to understand what art is doing, and why it’s important.

But aren’t you kind of a gatekeeper, Sam countered. I guess at this point he forgot he was at breakfast with me due to the part of my practice that includes going to breakfast with anyone who invites me (we all buy our own breakfast). Listen, this policy was not created merely because I like breakfast (though I do!) – it was a conscious effort on my part to thwart gate-keeperism. To give everyone a chance. I don’t know if it’s always worked that way, but it’s always tried to do so.

When I got back to my desk later, I looked up Sam’s Instagram stream, and he is clearly a funny, weird dude. His emails were articulate and informed. His admiration and respect for his classmates at CCS is evident, and that is a tremendous quality in a person (and an arts writer!) I think he’s very well-situated to begin a journey that includes writing as a part of his creative practice, as long as no one scares him out of it, so I hope I didn’t. But he seems to be waiting for something. He struggled a little to articulate the thought, but I think I understood that he was saying – no one cares what you have to say, until you’re established as a somebody.

Well, I don’t know that’s true. I started writing about art in Detroit for the Knight Arts blog, $45 a post. I don’t know that it was a platform that received a great deal of notice. It was just a way to begin. You can find any kind of way to begin, if that’s what you want, and if people think what you have to say is meaningful, I suppose you will get more of a platform to work with. If people don’t think what you have to say is meaningful, it’s good to know that as soon as possible, so you can work on it some more (or, I dunno, do something else with your time). It beats going through life oblivious to the fact that, say, people find you intimidating, and this sometimes stands in the way of your ability to meaningfully connect with them.

Addendum: After writing this, I later remembered a whole other wing of our conversation, which regarded art of the “pathetic” – which is the focus of Sam’s major ongoing writing about art. What initially began as research behind an interest in perhaps making art in this mode gave way to a sense, on Sam’s part, that he was not entitled to make art focused on his cis/white/male pain. But he has found some other degree of satisfaction, it seems, in continuing to archive art he sees as part of this canon. What, precisely, constitutes “pathetic” art was where we got into the weeds, though. Sam variously referenced, as examples, “Untitled (One day this kid…)” by David Wojnarwicz, “Painter” by Paul McCarthy, and the commissioned embalming of Rosalia Lombardo, an attempt on the part of her grieving father to preserve some trace of an Italian child who died very young of pneumonia.

These are all powerful examples (although the idea of Rosalia as an artwork is a little contentious for me – certainly Alfredo Salafia was a master embalmer, but I’m not sure her father, as the commissioner of the work, had artistic intent). But I struggled to understand what, from Sam’s perspective, drew them all together into a genre. We stumbled here, in part because I was unfamiliar with the specific works he was citing, and in part because it seems that Sam is still in the process of compiling this information into a kind of master index of art of the pathetic, that he is thus far content to distribute as a resource to interested classmates in a one-off fashion. This is as good a platform as any, I think, if it feels good to you. I’m still a little foxed as to what this genre is, but I’m interested.

Also, in describing the failure in the embalming of Rosalia Lombardo, Sam described it as, “Trying to keep something that can’t be kept.” — and if that isn’t a perfect working definition for every work of art, I don’t know what is.

I know I can be exacting, and sometimes overly focused on identifying the point. Also loud and interrupty. If I’m blunt sometimes, I apologize! It’s not to intimidate you – it’s that I can get pretty monomaniacal in the search and service of ideas. I care about your ideas, and I’ve been honored to share them with some of you over breakfast. I hope you continue to do what you can to get them out there in the world, if that is your wish. Just like I hope you know, Detroit, the door is always open.

P.S. I’m sorry to say that after three years, I’m discontinuing Breakfast with the Artist. I have enjoyed doing it, and all the great artists and people I’ve gotten to know a little better as a result, but I also need to recoup my unpaid writing time to apply to different projects now. This is my final BWTA for the foreseeable future. So if we had breakfast, thanks! If we didn’t – perhaps there will be another time. Don’t give up on art or breakfast or yourself! All you need is within you! I promise!