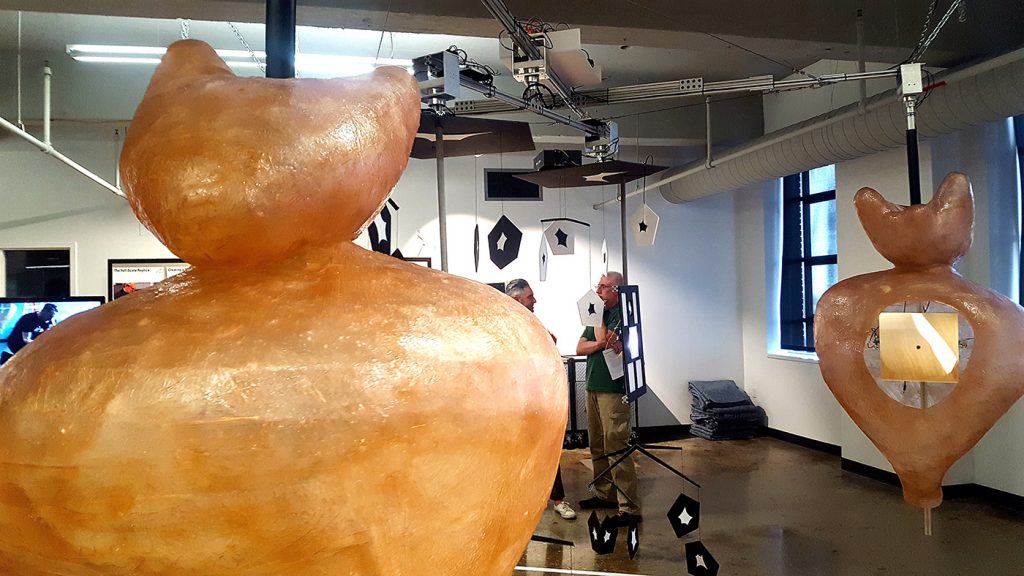 DETROIT — Remember the last time you called Siri into action, and instantly large, Venus of Willendorf-like figures rotated gracefully around with graphic, black-and-white mobiles, attempting to win a dance by signaling them with flashlights? No? That’s because artist Gordon Pask’s 1968 vision, “The Colloquy of Mobiles,” did not turn out to be literally prescient in terms of the physicality of machine-machine and machine-human interaction. However, Pask’s immersive and semi-interactive installation, originally created for the groundbreaking Cybernetic Serendipity exhibition at the Institute of Contemporary Arts in London, was remarkably oracular in terms of modeling a human environment containing conversational machines — now such a quotidian part of life in developed countries that we rarely notice it.

Maybe that is why the playfully physical nature of Pask’s forms and the somewhat analogue vibe of the installation powerfully draws the viewer’s awareness to this omnipresent conversation between machines and people. The opportunity to experience this awareness has been recreated at the College for Creative Studies, which debuted a full-scale replica of Pask’s installation, titled “Colloquy of Mobiles 2018,” at last month’s student exhibition. The piece is the cumulative presentation of the MFA cohort in Interaction Design, under the direction of Associate Professor and Chair of MFA Interaction Design Paul Pangaro. Two Interaction Design studios have worked since January to create first a scale model, and then a full-sized replica, based on original designs by Pask and Yolanda Sonnabend. The project logistics and execution was overseen and largely implemented by CCS Adjunct and MIT grad TJ McLeish, who designed, constructed, and fabricated all of the full-scale replica’s components, including the 3D forms, and the configuration of their animating motors, electronics, and software.