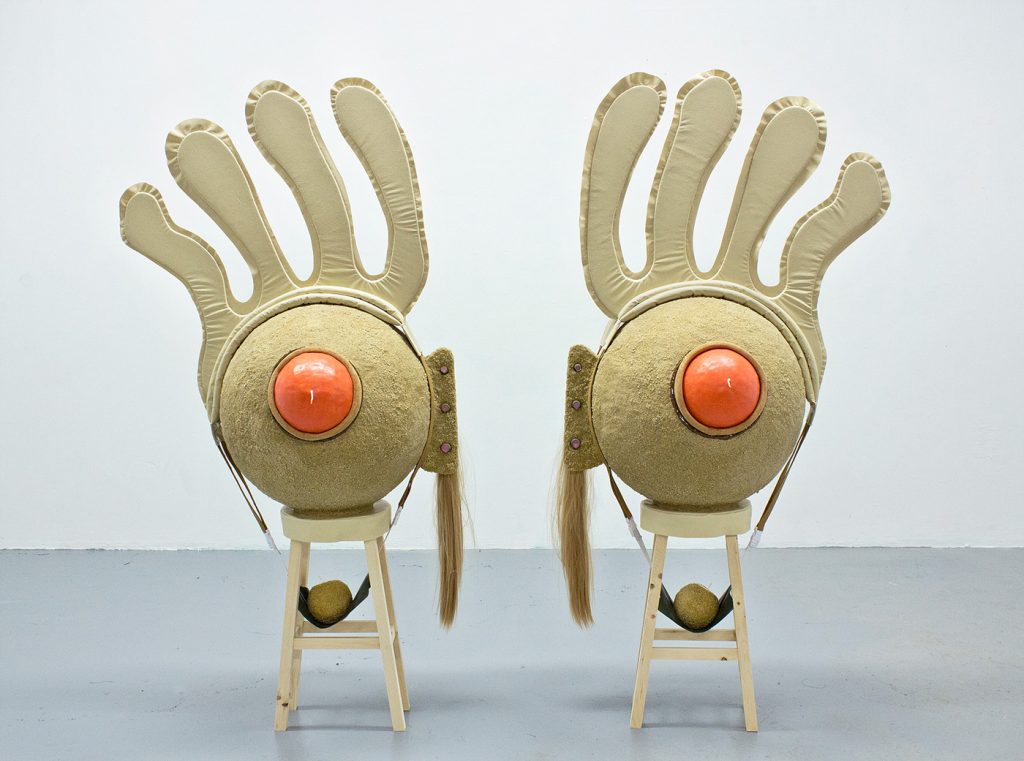 In her far-ranging interdisciplinary work, artist Sidney Mullis manages to strike an intriguing balance between humor and visceral discomfort, examining aspects of the everyday at such odd angles as to make them alien. This may take the form of “mating ritual” video works, choreographed by Mullis in a nod to her childhood roots as a dancer, and performed by the artist in hilarious self-made costumes, falling somewhere at the nexus of nature documentary, K-pop music video, and meme. Then there are her upside-down, drippy teddy bears, which Mullis has lately taken to wax-coating into surreal candles on commission (one can almost see them labeled “Nostalgia” scent in a Twin Peaksian Yankee Candle outlet). In “Preservation of Forgetting” (2017), she assembled objects that “people did not want” into large, sculptural works, unifying disparate materials with a neutralizing layer of brown papier-mâché, the application of which feeds her self-described “haptic obsession” with repetitive touch in art making.

Recently, Mullis synthesized many of these interests in a body of large-scale sculptural, video, and intermedia works, united under the collective title Who is Puberty and How Does She Hit?, on display at the Bucknell University’s Samek Art Museum earlier this year. Most prominently, the exhibition featured a custom make-up tutorial commissioned from 14-year-old YouTube star and aspiring makeup artist Caden Levene. Mullis has continued the project in various forms, including the recent translation of her unsettling sculptures into T-shirt images. I interviewed the artist via email about how she approached the most universal of human experiences: puberty.

An Artist Captures the Comedy and Discomfort of Puberty