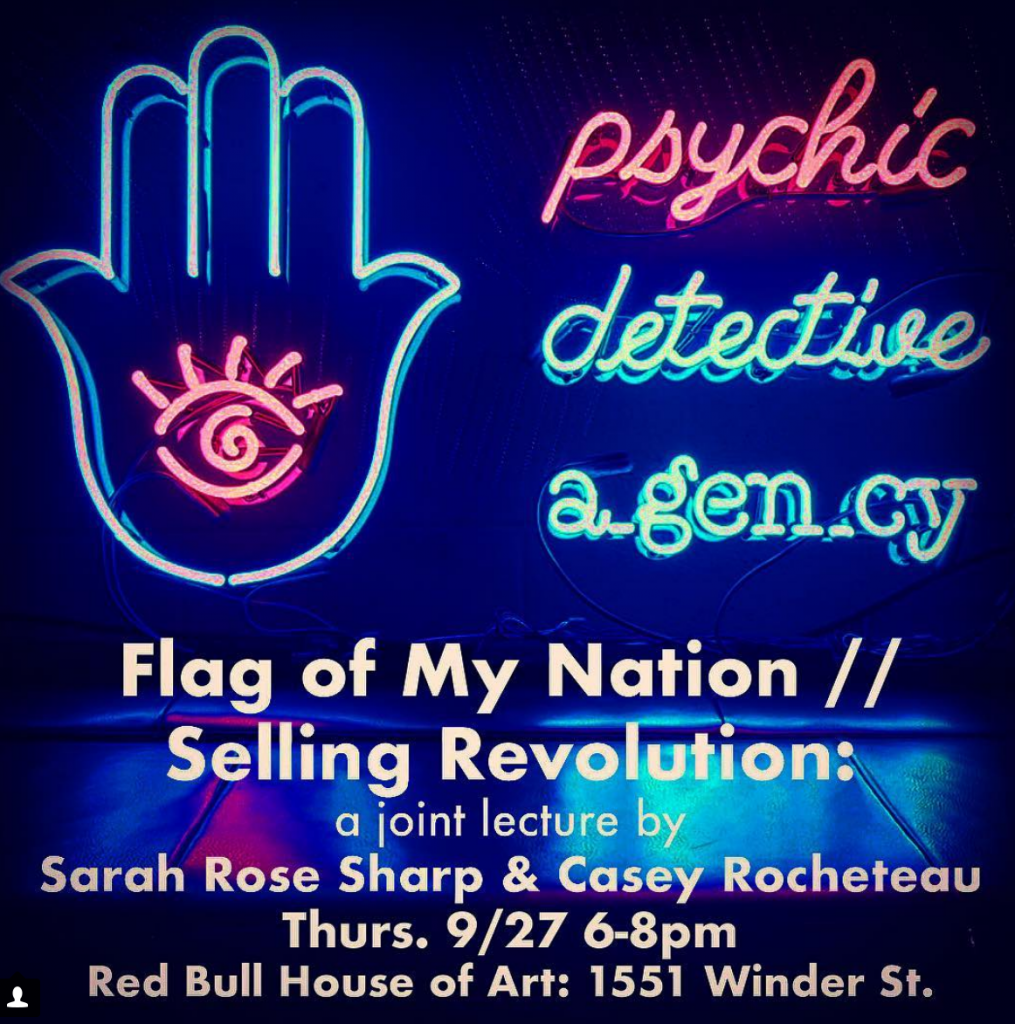 I haven’t talked very much about a.gen.cy, despite it being a project I’ve been working on, in some form, for nearly two years at this point. Its genesis came in the aftermath of the 2016 election disaster, and a series of conversations about art as resistance, hosted at Play House and mostly involving distraught members of Detroit’s art community. At one conversation I attended, I raised the idea that many of society’s problems are rooted in the constant consumerism that is necessary to fuel our prevailing system of capitalism. I had been batting around the notion, in my brain, that a lot of society’s ills could be addressed by simply making advertising illegal.

But of course, that’s not going to happen. Perhaps the next best thing would be to make advertising disruptive. After all, in this era of social practice art and multi-media, there is very little to distinguish art from advertising, aside from the effect it intends to have on its audience. Advertising is primarily concerned with inciting the action of consumption, and as such, it must, somehow, point the viewer toward the project, brand, or experience it is attempting to promote. Art, on the other hand, is actually a sneaky vehicle for critical thinking, precisely because it does not offer pat answers and does not generally provide the viewer with an easy way to resolve their relationship with the thing they are seeing. They have to think about it, come to some kind of conclusion on their own about why it exists.

These two processes are at odds with each other; if we collectively posses the ability to critically dismantle imagery and messaging, to ask the crucial question of why it has been created and what it is trying to tell us, we have the power to negotiate and control our relationship with it. If we do not have critical thinking skills, we just believe whatever we hear.

I think there is a reason that public education has progressively diminished its relationship with the humanities, and it is precisely because it is easier to sell to a market that has lost the ability to question your claims.

But obviously, advertising is a powerful mechanism, and it led myself and other interested parties to wonder what might be accomplished if we used advertising to promote something besides mindless consumerism.

That’s a.gen.cy. That’s what we are trying to do. It is a difficult process, one that has not been made easier, per se, by receiving a Knight Arts Challange grant last year, which at least empowers us to pay people (specifically artists) for their work – and has been made a whole lot easier by our phenomenal and visionary angel backers at Red Bull House of Art Detroit. I do understand how ironic it is that the only entity willing to match our first year funding on a wing and a prayer was a giant corporate brand. I do. They have been an incredible patron, and invested so much trust and effort in our idea, as we allow it to unfold.

We’ve initiated a number of projects, and I’ll likely have more to say about them in the future – if I can find time away from the paperwork and logistics planning and, you know, holding onto the jobs that actually pay my bills, because running a conceptual ad agency does not – but for now I just want to mention that the final installment of our first-year lecture series: IDEAS – An Extraordinary Substance is on Thursday, Sept. 27, from 6:00 – 8:00 pm at RBHOA on Winder Street in the Eastern Market. Yep, that’s this evening! My partner-in-detecting, Casey Rocheteau, will be lecturing on the topic of Selling Revolution, and I’ll be talking about flags and Flag Art. In this way, it follows the high precedent set by W. Marcellus Armstrong in our first lecture, earlier this month, where he shared his research on Dance Show Aesthetics.

We are all, in some way, trying to reconcile our relationship with media. We believe in artists and trust you to do amazing things. We will be serving free ice cream.