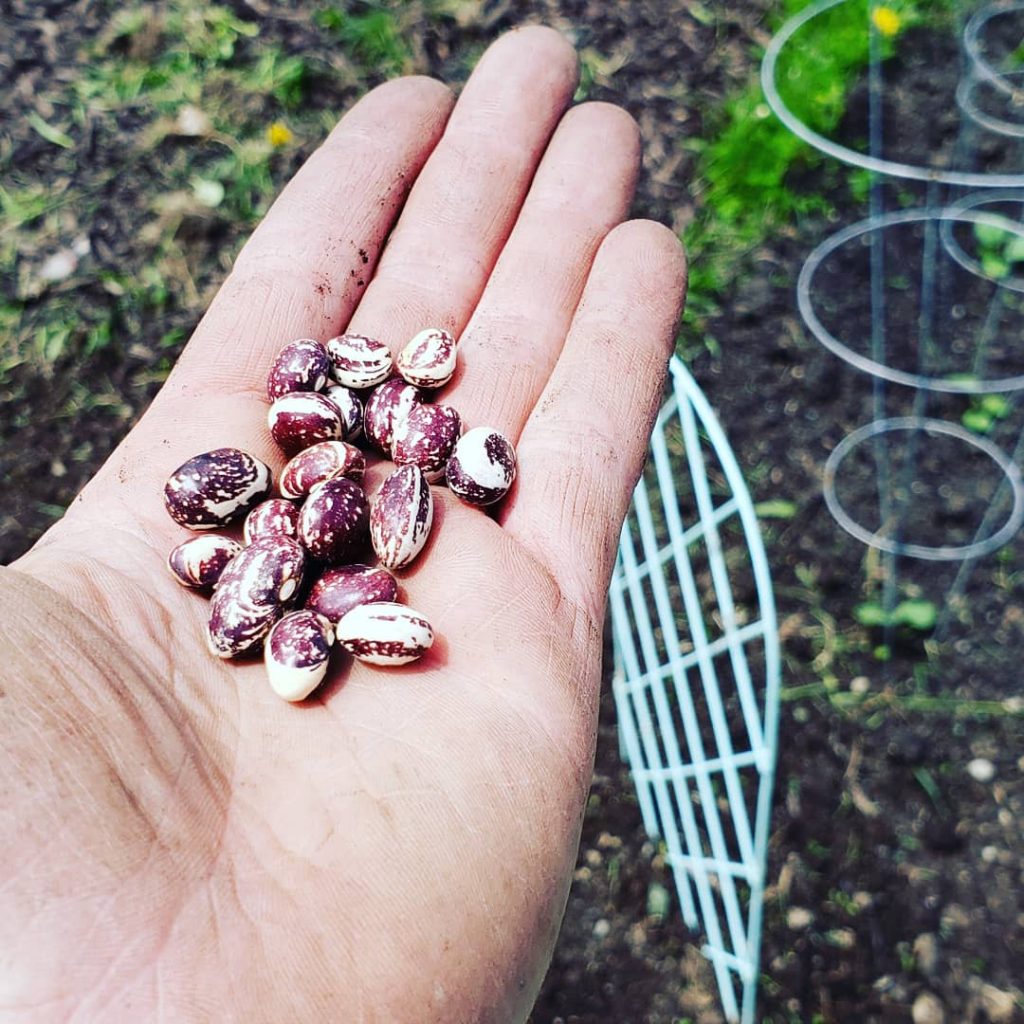 Reason #10,000 that I am terminally single: I voluntarily signed up for a 4-week class titled Reading Walden in the Anthropocene at the Detroit arm of Brooklyn Institute for Social Research, because it sounded fun and interesting to me. I get it, man, I think too much.

But it was great timing, see, because Walden has been on my mind lately. I tried reading it some decade or more ago, and finally gave up during the chapter where he starts talking about beans and truly never fucking stops talking about beans. I was like, “HD, buddy, I’m proud of you for growing a bunch of beans, and clearly, you are too—but no one cares this much about beans.”

However, time has passed, and it’s garden season again. I sold my house in March of 2018, where I had been building a garden for 8 years, and had both the opportunity and the burden to start from scratch at my new place—which has a much more expansive, sunny yard—during the hottest summer I can remember since I’ve lived in Michigan. So I didn’t really get much going last year. By “not much” I mean I planted 10 trees (all of which made it through the winter and appear to be thriving!), started a perennial flower installation (irises, tulips, floxx and decorative onion killing it on the comeback!), got some rose transplants happily cohabitating with lavender companions, established strawberries, mint (in barrels, I’m not insane), and raspberries, commissioned an amazing, huge raised bed from the inimitable Leslie Rogers and got my garlic crop resettled there, and rough-sketched the outline of a hoop house (starter pieces courtesy of Shoshanna Utchenik—it takes a village to raise a hoop house!)

All this is fine—and in fact, making flowers and decorative elements a higher priority represents revolutionary thinking on my part, in terms of what is frivolous. Beauty, pollinators, and happiness is not frivolous. It’s okay to plant things “just because” they make me happy. But make no mistake, a big component of my quiet little revolution in moving to Detroit is to be able to small-scale farm and live a more sustainable existence as a part of it. As I march through my 30s, I’m able to see progress in action, rather than only success in retrospect—so I can see now that all the work I’ve done over the last decade has allowed me to take these big steps forward recently. I remember reading this 2007 interview with film director Mira Nair in The Believer, where she spends a portion of it talking about the garden she’s been cultivating in India. Rereading it now, I see it says something a little different than I remember, but I think I attached to the line about how at 18 years, her garden is “reaching maturity”—I felt shocked by the idea that it could take 18 years to have a garden. I would have been 26 at the time of reading it, so of course I didn’t understand the first thing about how time works, not to mention had no understanding of how gardens work back then, but I remember thinking I could probably get a garden together faster than that.

I understand better about those things, now. My last garden, at the time I sold my house, was just coming into its own—the summer preceding the house sale was a twice-weekly haul of perfect, highly Instagrammable vegetables. Coming off that into two completely blank slate adjacent lots, with grass covering what must have been at least one house foundation, was a huge comedown, but it’s also a huge opportunity. Gardens are a thing you build, year over year, and each spring is an opportunity to see what your garden has held in its memory. It is a long and literally fruitful conversation, and in a social climate where attention spans and sincerity are dying on the vine, I seize long, fruitful conversations wherever I can find them.

What I’m saying is, I care a lot more about beans than I once did.

I’ve been working on the yard intensively over the last two weeks—cold crops are in the large bed and thriving; I bought a roto-tiller so I can properly break ground for hot crops, which I’ve experimentally planted in a kind of square doughnut with a flower mound in the middle—and I started thinking about beans. I’ve also been thinking a lot about withdrawal. I’ve had to take some big steps back from the scene lately. It has really tired me out, like on a deep, soul level. I am not all that well-equipped to deal with people, and for most of my life, I didn’t really have to—because as a basically chubby nerd, and kind of generally useless individual, there was a limited number of people who had interest in my attention. Attending to those interests was possible without spreading myself too thin. I didn’t get into arts writing out of a burning desire to be the focus of a bunch of people’s social and professional ambitions; I got into it because I’m naturally drawn to art and language and I like critical thinking and visual analysis. I also like creative people, and people who care passionately about things.

But I don’t like insincere people, and I have really struggled with the experience of people trying to get close to me in order to instrumentalize our relationship for their professional gain. It’s basically the professional version of being used for sex, and I don’t really like being used for either of those things. I get it, artists, a lot of you are seductive, charismatic, attractive people. You use your skills of observation and short-term, high-intensity interest in things to draw people into your orbit and act as your advocates. I get it, because I am an artist too, and from that perspective I say: stop. It is a fucking gross way to be. Don’t pretend to care about people, places, and things when what you actually care about it yourself. Or, do whatever you want, but do it the fuck away from me. I have beans to grows.

Anyway, that brings me, again, back to Walden, because from what I remember from my first reading, the thesis is: fuck all this, I’m going into the woods to commune with nature. Sometimes, people learn of my origin story in Detroit (which involved a road trip to all 50 states) and ask where I would have gone if not Detroit, and the answer is: I found a little town in Alaska that I really liked, and that was my second runner-up. Who knows if I could have actually hacked it there, but my point is, it is definitely within my spirit to want to My Side of the Mountain the fuck away from people and focus on creatures with more straightforward agendas (robins want worms, for example). Luckily, Detroit is one of those best-of-both-worlds situations, where I can own land and work it, live independently, and still go see a movie and hang out with the five people I do actually enjoy. Though I imagine I’d have an easier time dating in Alaska, just by the numbers.

Walden, right. The first of four sessions was yesterday, and we discussed the politics of naming the Anthropocene, and more specifically, the act of dating it to coincide with different points in recent human history. Scholars Heather Davis and Zoe Todd make an excellent argument, in their essay “On the Importance of a Date, or Decolonizing the Anthropocene” (ACME, 2017) that it is crucial to create a link between the Anthropocene and colonization of the Americas, in order to frame it not as a function of collective human nature, but rather a system feature of Western colonial practices. Overuse, destruction, alteration, and exhaustion. For me, this tracks both logically and emotionally at the moment. Some of the very intense and difficult reading for this class is then balanced out by the Walden portions, where Thoreau manages to present his lived experience in multitudinous ways: by metrics, empirically, but also poetically. It gives the readers so many ways to care about a fucking pond, the surrounding forest, some fucking beans, and by extension, wild and semi-domestic spaces as a whole.

It is good work for me to be thinking about, as I try to think about a way to find something I care about again. Because unlike (gross!) people who pretend to care about people, places, and things when they really only care about themselves, I can openly and unapologetically identify being in a moment where I need to care about myself, because I’m losing my ability to care about people, places, and things. You can send me your press release, if you want, but don’t try to leverage some sense of personal relationship coincidentally five minutes before you have an art opening. Don’t troll my social media looking for things I care about, so you can use them to start conversations that make me feel known. And don’t expect me to care about you and your needs, when you’ve made it clear that you view me and my needs as existing purely for the purpose of being of use to you. I see what you are doing, and it makes me think less of you. Just say what you want, and let me get on with my day. I’ve got peace to seek, dying alone to do, and beans to plant.