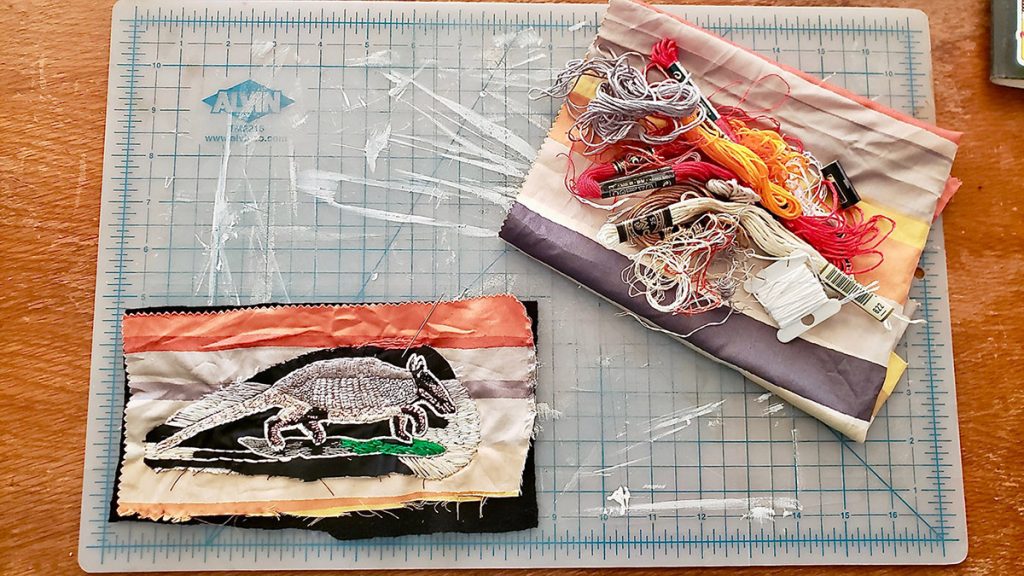 I am curious today about the continuum of experiences artists have with their objects—if objects are what you make. I am always prone to hyper-fiddly types of making processes, given any amount of time, space, and materials—which, for the first time in my life, I have in simultaneous abundance #blessed—and absolutely regard making as a meditative process that is self-satisfying (and a good excuse to binge TV or podcasts without feeling like a total piece of garbage). But I also like my outcomes. They seem very right to me. I like to be able to see them. I sell them sometimes, but I find that I miss them, when I do. I find myself wishing I could see that thing again. I used to be comfortable with the idea of finishing work, but lately I don’t feel as certain about things being done. Perhaps the perspective of age, that I like having the option of picking it back up, later.

I noticed this, because I’ve been doing longform embroidery and mixed-media fiber works, based on what I call “involuntary collaboration” with artists who have screen printed their imagery on fabric. I started with three works by Erin Anderson-Ruddon, and have moved on to a menagerie of animals and images by ToothxNail in the UK. I have some stuff I copped from Cleveland-based artist Michael Lombardy on deck for my next set. But I’m stalling right now, because the armadillo I’m working on is already spoken for, and I think I’m taking it so slowly because I understand that this is the only time I get with it. Then it goes out of my life, and I don’t necessarily get to set eyes on it or lay hands on it ever again.

I don’t believe in procrastination anymore. I believe my brain enables me to do things when I’m ready to do them. My first lesson about this was with writing. I am just not one of those writers who fucks with writer’s block. I sit down to write about ten times more often than I write. If I find myself poking hornets’ nests or chasing rabbits down internet holes, I get up and do something else, because the writing is not ready; anything else is just going to be button-mashing, and read that way. I say it’s like baking a cake. If I’ve put the ingredients together, mixed them around, and stuck it in the oven, I can peek at it as much as I like, but it’s not coming out until it’s baked. So might as well walk the dog, weed the garden. You’ll hear the ding when it’s ready.

I see maybe the same is true about object-making. It’s always flattering to sell work, and represents an always-welcome financial boon when it happens, but it does me little good to know that a piece is sold in advance. Then art-making, which for me is an ultimately selfish act, is forced into a place of selflessness. I’ve become a surrogate mother for a work, which will come into the world and immediately go to someone else.

I find, when I have a show, I always sell the works I like the best. As art is subjective, I can’t say that these must be the best works, but those are the ones that always seem to go. I suppose there are works I never think about anymore—I am far less precious, for example, about photographic prints that I have sold—but there are ones that I still regret letting go. I am better mollified in cases where I traded them not for money, which has gone into groceries or my gas tank, but other art objects, which I cherish every day.

Goddamn, art is great. I hope you make some today.

And I wonder what you’ll do with it. Tell me!

I think creative process is like REM sleep, occurring at regular intervals, and yes, you do have to wait for it. That doesn’t mean that the other parts of the process aren’t useful and necessary though