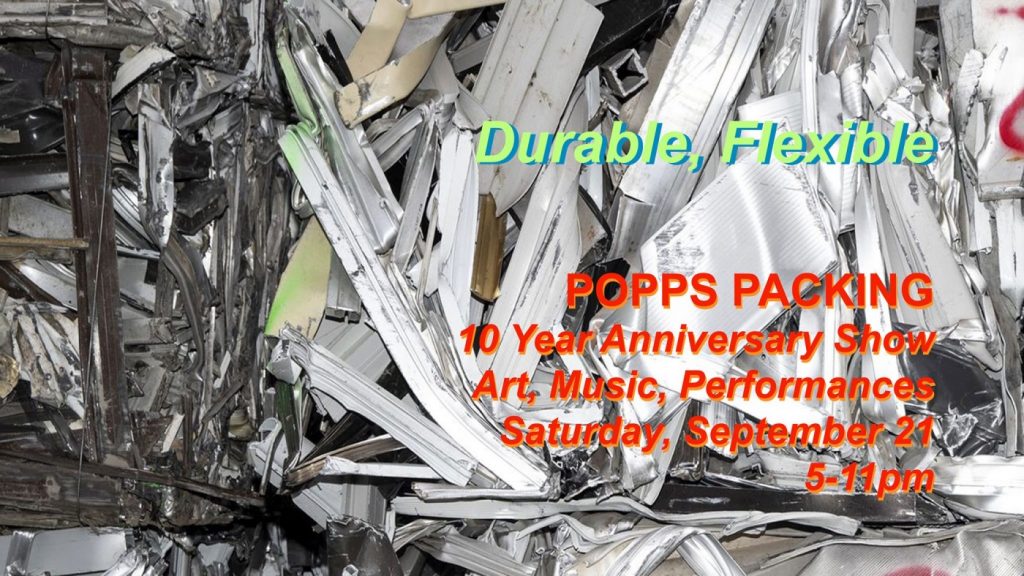 If you know me, you know that I hold a special kind of disdain for the specific cultural practice of weddings. I’m fine with people getting married to whomsoever they love, or wish to legally partner with, or quietly hate but use for financial stability, but I find it tremendously awkward to be called upon to celebrate people’s decision to get married. It’s like throwing an expensive party BEFORE you run a marathon. You haven’t done anything.

I much prefer the institution of the anniversary. An anniversary is a milestone, an opportunity to look back on that dumb, idealistic moment when you started something, and celebrate your decision to withstand every bit of opposition, nonsense, trouble-shooting, and radical joy that has come since. It’s a lot easier to make an anniversary toast, see, because something has been accomplished. Which is a long, roundabout way of me saying congratulations to Popps Packing for 10 years of dedicated anarchy, community, family, and compound-building, and of course, first-class art.

Faina Lerman and Graem Whyte are a couple of the most determined and artistic spirits I know. Before I even lived in Detroit, I happened to be present for a performance by Faina and Bridget Michael as the Tzarinas of the Plane, and it truly opened my eyes to what art can be, and for whom. Graem has practical skills so dizzying that it almost distracts from the fact that he is an incredible architect of spaces, big and small. Almost. They are both funny, hardworking, and relentlessly creative. Popps has maintained a breathtaking pace over 10 years, presenting dozens of shows, hundreds of local and international artists, and expanding their residency program to specifically support parent-artists — a condition the two of them know quite a bit about, raising two young people in the midst of raising their artistic vision.

Saturday, we celebrate 10 years of Popps with Durable/Flexible (in honor of their aluminum anniversary). It’s a salon-style show, and I have a few works in there, as will, I expect, a healthy portion of the Detroit art corps. Cuz truth be told, I don’t know anyone who deserves a celebration more.