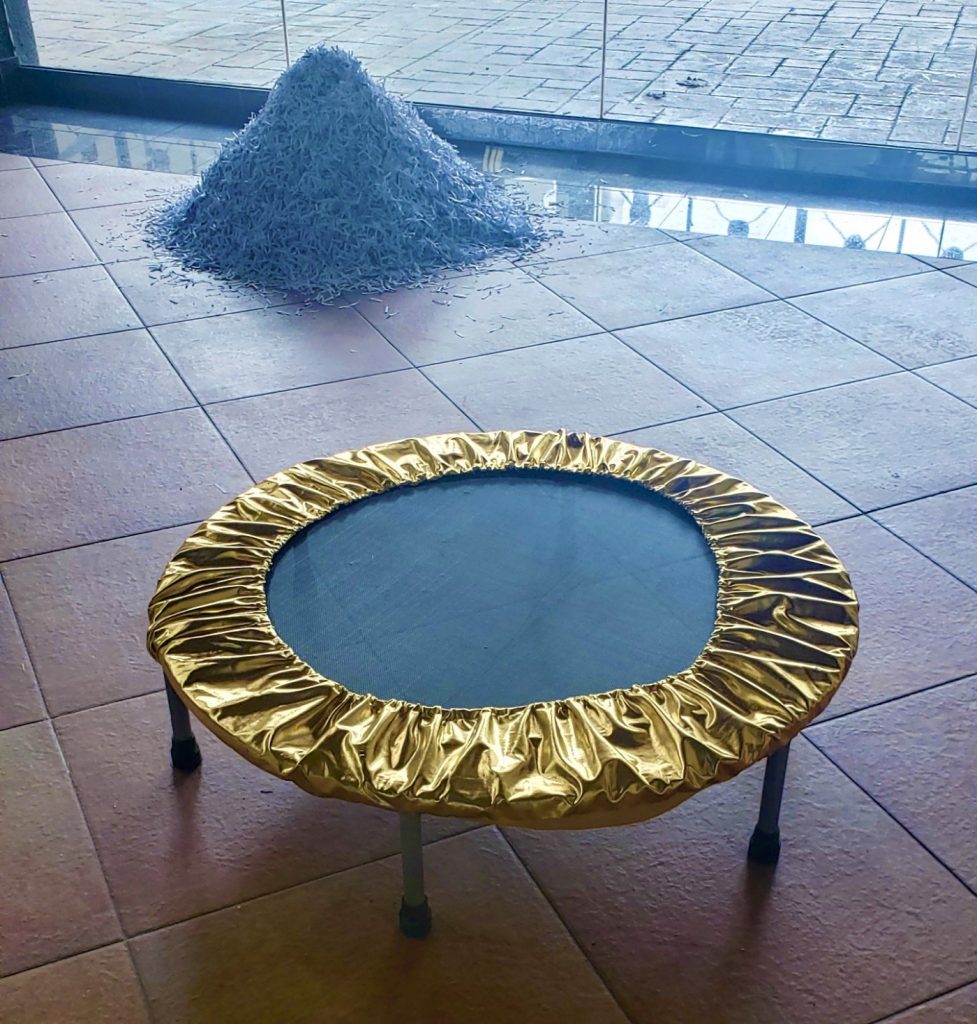 Taken together, the 2020 grad cohort has presented a dynamic set of exhibitions across a wide range of media. Notably absent from the entire exhibition is much representation of the human form. The only person to appear anywhere in the work is Sally Clegg, framed between chin and waist in some of her video works. All others, and even Clegg herself, seem to mostly present their ideas by way of proxy—Erin McKenna with a deep emphasis on process, Kim Karlsrud with microcosmic landscapes, and Abhishek Narula through the exploration of entire systems that are invisible to the naked human eye.

It seems that the term “self-love” is a little too warm and fuzzy for the likes of Sally Clegg; she uses, instead, “auto-affection” as the eponymous concept for her installation. The impersonality of the term is fitting, as her work seeks to abstract and mechanize the process of self-pleasure, forcing ideas of auto-erotica through a series of different stand-ins for the human form. A series of paintings are composed via the interaction of vibrators and oil paint on cotton sheets, stretched as canvases. These paint the suggestion of masturbatory action in a bed, without the intercession of a human body. A bed is physically present at the front of the exhibition space—the lofted, white plane of the mattress depressed into a cone-shaped well in the center, filled with a pool of clear liquid—not the shape of a human figure, but a hyperbolic impression of wetness. A long narrow table presents objects cast in white silicon on black fabric; the material is inextricably suggesting of sex toys, but the shapes are quotidian: seashell, aluminum can, lightbulb. These lead the eye into a colorful “self-portrait” made of 121 dildos that feature a miniature likeness of the artist, cast in a rainbow of silicon with other embedded materials, mounted to the wall in a giant circle with hardware that is either literally or suggestive of cock rings. The final wall features a series of videos that showcase the artist interacting with fruit—inserting a small hand vibe into a tangerine, polishing Concord grapes to a high shine.

When I first encountered Kim Karlsrud’s work, it was a giant pile of rock salt she’d arranged to have deposited inside the common area at the Stamps Grad studios. For her grad show, Karlsrud had to grapple with how to present her work in a gallery setting, when it is primarily a practice of intervention.

“I decided to shift my attention to, what does it mean to do an intervention, and then to represent it? Where does it live? Where is the work once it happens?”

This manifests as two low, squared-off piles of landscape materials—rock salt and sandy soil—each of which serves as a projection surface for time-lapse multichannel videos that turn them into microcosmic landscapes viewed from above. Benches are provided adjacent to the works, seeming to invite long viewing and consideration of the shifting imagery. Adjacent to the floor pieces, a kind of cook station is set up, somewhere between food cart and mobile science laboratory, hung with gleaming copper pots and holding a chunk of soil in some process of distillation. Something about the station’s relationship to the works and the materials suggests a kind of stand-in for the artist, who meditates on the interactions of humans and materials, especially with regard to nature and landscape.

In addition to the discrete exhibitions in the Stamps Gallery, all four grads share “work cite”—a single glass-walled room where they have each acknowledge their citations in a kind of “visual bibliography.” Karlsrud’s contribution within this space is a long printout of her works cited list taped to one of the windows; then also rendered as a tiny mountain of document shred. This is a charming encapsulation of Karlsrud’s deep relationship to text, and her ongoing practice in transmutation of the text-idea space to a physical geography that can be explored in kinetic or sensory ways by the viewer.

Erin McKenna: finding the shape of the overlap

Erin McKenna’s piece inside “work cite” is a small trampoline, skirted in gold lame fabric. One suspects that the visual pun of offering the trampoline as a “jumping off point” for her work is not lost on McKenna—her entire exhibition is suffused with joy and whimsy, to the point that it initially might distract from how much work has gone into the making of her pieces.

That’s because McKenna’s installation is a deep-dive in process. The wall introduces her show with a rundown of the “rules for making”—in no particular order, because one of the rules is “no hierarchy of materials” (presumably including the rules themselves). Among the others are: “subvert expected use,” “always let the labor be visible,” and “complicate binaries, stereotypes, and associations.”

Viewed through the framework of the rules, McKenna’s colorful and eclectic pieces—a number of which are built around partial trampoline frameworks and other dimensional structures that either freestand, or relate to the wall in a condition I consider “2 ½ D”—are rigorously formal exercises. The labor that she has extended to even the smallest details—each nailhead and bracket has been decoratively painted with nailpolish, for example—and the high visibility she’s given to the installation infrastructure both requires slow viewing, and pays it off with a panoply of visual Easter eggs scattered throughout the work.

What is not entirely apparent from just looking at the works is whether they were made according to the rules, or the rules were extrapolated after the fact of making work based in intuitive practices.

“I realized them kind of midway through,” said McKenna. “And I wanted to think about how I was making decisions, and wanted to get them on paper. It doesn’t always look that way, but there is so much order to what I do.”

There is a kind of tension to the process that McKenna is forcing into visibility—her work grabs a lot of attention without, perhaps, deciding what to do with the viewer once it has an audience—but leaving room for open-ended conclusions seems well within the scope of McKenna’s practice. After all, she’s just made the rules—she didn’t say we have to play by them.

Abhishek Narula: You are not here

If McKenna is interested in drawing the eye to the labor of art-making and installation, then Abhishek Narula is concerned with the virtual life stirring all around us. Awhile ago, apropos of seemingly nothing, my 89-year-old grandma asked me, “Where is the internet?” I laughed at first—oh, grandma!—and then I thought…wait, where is the internet? For an artist with training as an engineer, Narula can see the layers of technology and communication that are invisible to the layperson. He has made it his business to create art that helps the rest of us visualize these realities.

This manifests variously, but tends to hinge on manipulations that hack or bend geolocation functions in mobile devices and networks to impersonate other locations. In the Work Cite, Narula has programmed a phone to virtually travel, by its GPS, along US highway 50, also known as “The Loneliest Road in America.” To someone watching the data, Narula’s device is in a continuous state of travel along US-50, without ever physically leaving the gallery. In his solo exhibition space, Narula has erected a square tent made of wave resistant fabric that creates a pocket impenetrable by the wireless signals constantly identifying spaces in the virtual field. Within this tent, Narula has geo-mocked his home studio, hence creating a place that, virtually speaking, is indistinguishable from a different physical location. In fact, Narula is moving the entire gallery back and forth across a busy street in downtown Ann Arbor, by way of a wireless router that travels back and forth along a 70-foot ceiling track.

Because Narula’s work is dealing with the invisible, it feels extremely abstract for someone like myself, who can grasp what he’s talking about, but not see it. In the end, I could not answer my grandmother’s question without asking the internet where the internet is kept. This is, of course, Narual’s point—the immaterial functions of the internet have physical infrastructure, as well as bandwidth that shapes reality around us. His work seeks to complicate the hierarchy between virtual and physical worlds, but as it is presented in the physical world, it requires a bit of translation for those not versed in the language of technology. Luckily, Narula has outfitted a couple of power outlets with custom extensions that click in an unsettling and indecipherable language, perhaps as a reminder that the matrix is all around us, and not to forget what’s going on outside the range of our vision.